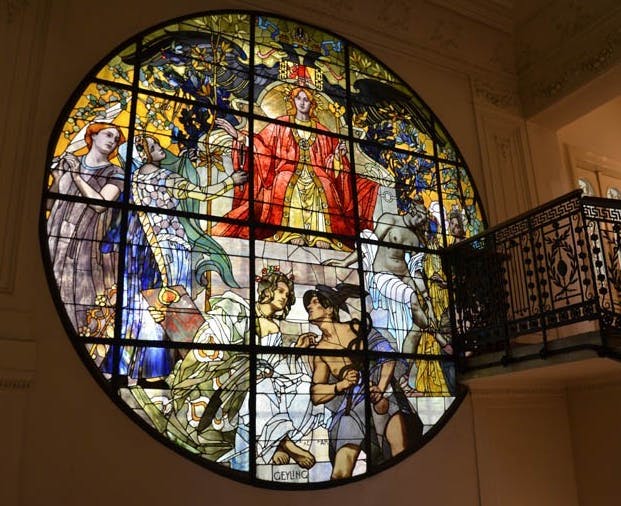 There aren’t many traditional druggists left in Vienna, but the few that remain have storied histories and a faithful clientele. One of these is W. Neuber’s Enkel. It has stood proudly on the Linke Wienzeile since 1865, and among its most famous features are the Jugendstil stained glass windows from Carl Geyling’s Erben. This is one of the oldest still extant businesses not just in Austria, but in the field as a whole. Founded in 1841 by stained glass artist Carl Geyling, the company became famous around the world and an official purveyor of stained glass to the imperial court in Vienna. It is therefore fitting that the refined artistry of this oldest of Austrian businesses can still be admired in one of the few remaining traditional Viennese druggists. Surely the highlight of the building interior is the giant circular stained glass window with a 5 meter diameter located in the stairwell. It depicts an allegorical ‘Austria’ respendent atop a magnificent throne surrounded by allegorical figures of trade, handicrafts, and industry. This window was even displayed at the World Expo in Paris in 1900, where it won a prize. Today, it can be admired while perusing the large assortment of salves, medications, oils, and cosmetics that W. Neuber’s Enkel has sold for well over a century!