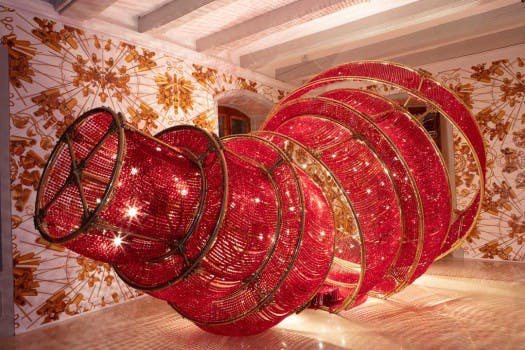 Only a few weeks ago the MAK opened its latest show, which will be shown until the end of May 2019. The exhibition is called “Chinese Whispers”, and presents the world’s largest collection of contemporary Chinese art, carefully composed over the past 40 years by the private collector Uli Sigg. The collector, who lives in Hong Kong as the Ambassador of Switzerland, gathered more than 2500 artworks and is now presenting an exquisite selection in Vienna, including three works by the well-known controversial artist Ai Weiwei. The artist is convinced that if it hadn’t  been for  Uli Sigg gathering Chinese Art from 1979 on, the West would be unaware of the contemporary art world in China right now. It was also the collector who recommended Ai Weiwei to Harald Szeemann, the curator of the Venice Biennale and the documenta in Kassel in the 90’s, the two most important art shows worldwide, which gave Ai Weiwei a world stage.  Not only the MAK, but many other museums in China would be empty right now, if not for Sigg, who has bequeathed over 1400 artworks to various museums – that´s probably why he is still thankfully supported, even in spite of his strong link to Ai Weiwei, who engages in political activism through his art and who was arrested in 2011. After he left China in 2015, he moved to Berlin and is teaching at the Academy of Arts. But the link between the collector and the artist is only one small part of the exhibition, which describes the past 40 years of Chinese history in a very vivid and drastic way. (JE)