From smoking alternative to children’s candy: the story of PEZ 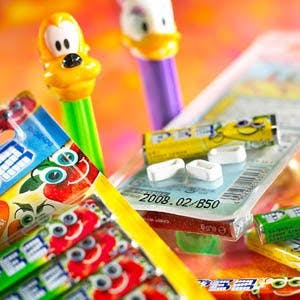 When you think of Austrian products and companies, you might think of Red Bull, Manner wafers, or Doppelmayr ski lifts. However, there is another well-known company from your childhood that you might not realize is actually Viennese!

Remember PEZ candies and the playful dispensers they came with? They began life as a compressed peppermint sweet created by Eduard Haas III in Vienna in 1927. In fact, the name PEZ comes from PfeffErminZ, which is the German word for peppermint. Haas made the first of these mints using family baking powders, and then teamed up with Oscar Uxa, who invented the first Pez dispenser. These dispensers were originally meant to resemble a cigarette lighter, and the mints themselves were marketed to adults as an alternative to smoking.

This first dispenser, like the dispensers today, held exactly 12 Pez candies. It was only in the post-war years after the mints were introduced to the US that the dispensers became more playful and marketed towards children, with a Halloween witch, Santa Claus and Mickey Mouse being some of the first character dispensers. In the 1960s Pez started to get experimental with its candy flavors, and added such unusual favors as Licorice, Flowers, and Chlorophyll.

Although ownership and management of the company has changes several times over the decades, the Haas family bought back majority stock in the company, and the headquarters continue to be in Traun, Oberösterreich. Over the years PEZ dispensers have become collectors items, with the highest verified sale of a mickey mouse dispenser coming in at $7,000, though there was also an $11,000 sale that ended up being confirmed as a well-made fake.

There are also Pez conventions all over the world where collectors and enthusiasts gather to show off their collections, so mark your calendars, Pez fanatics: the next Vienna convention is being held in August 2019!