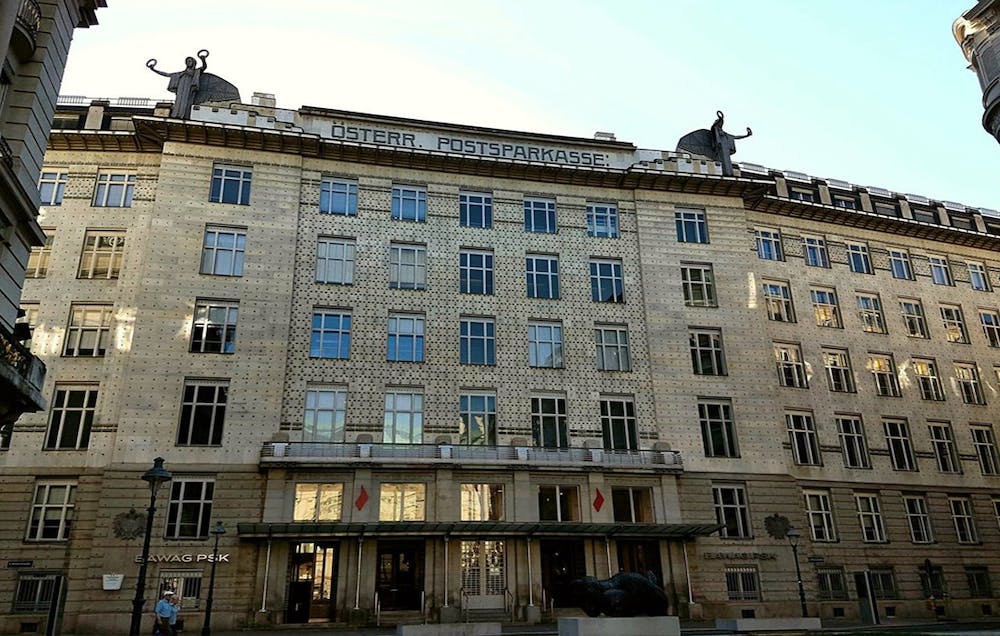 One of the most impressive and imposing buildings in the 1st district is the Otto Wagner-designed Österreichische Postsparkasse (Austrian Postal Savings Bank) building. It was opened in 1906 and represents not only the pinnacle of Wagner’s career, but also the culmination of decades of architectural study and design work. The bank itself was established by a parliamentary bill in 1882, and was originally located in the Wollzeile. The founder and first director of the bank, Georg Koch, revolutionized banking by introducing cashless transfers, and by the turn of the century the bank was looking for a new and larger headquarter. They found a location on what was formerly called Lisztstrasse, but which today is known as Georg-Koch-Platz in honor of the bank’s founder. Otto Wagner won the commission to build the new headquarters, beating out 35 other architects, and it is safe to say that he delivered!

The building is an exquisite example of Austrian Jugendstil, and Wagner had a hand in designing every element of it, from the exterior, to the interior, down to the very last table, chair, and doorknob. The exterior of the building is clad with Sterzing marble and countless small bolts that serve both a practical and aesthetic purpose – very much in line with Wagner’s claim that “something which is impractical can never be beautiful”. In addition, the building exterior is meant to evoke a treasure chest as a symbol of deposited and saved money (which is appropriate for a bank!).

But if the exterior is imposing, the interior is even more impressive. The main hall with its glass ceiling almost looks like it should have a swimming pool in the middle of it, but it manages to maintain a cool elegance through its airy and spacious design. Many of the interior walls can also be moved in order to change the size and shapes of offices, depending on the desired use. Famously, Wagner even designed the heating vents for the building, which snake up the wall with steely yet pragmatic grace. In fact, even Kaiser Franz Josef was reportedly so impressed with this modern architecture that, upon touring the building, he said “It’s remarkable how well people fit in here!”. (C.G.)