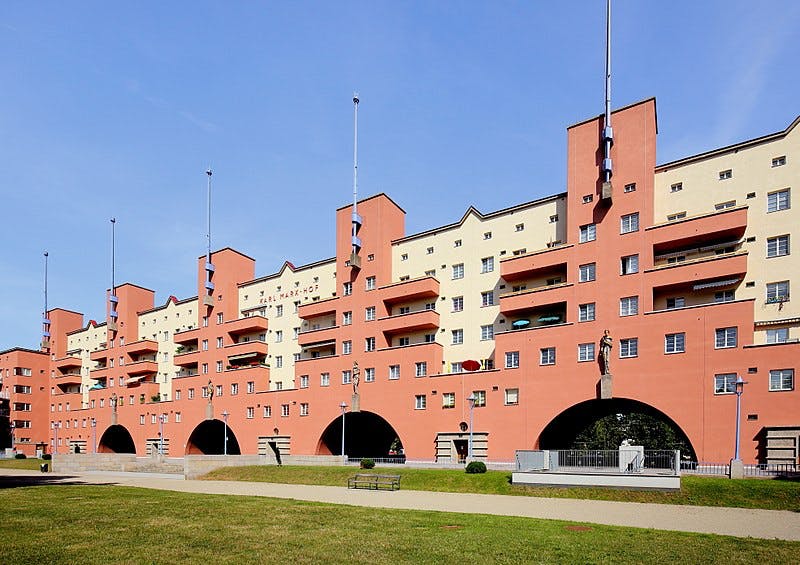 The 5th of May 2018 marks the 200th anniversary of the birth of Karl Marx. Even if the man himself is said to have traveled to Vienna only once during the turbulent year that was 1848, his ideas travelled the world and, for better or worse, changed it irreversibly.

Vienna’s relationship to the man and his ideas is a complex one, not easy to grasp unless placed in the larger historical context of the implosion of the Habsburg dominated world and the birth of the Republic of German-Austria in 1918 at the end of the World War I. After centuries of being the cultural and economic hot-spot of a large Empire, Vienna woke up to the harsh reality of being just a big, over-populated city with huge social and economic problems. Promising to alleviate some of these issues, the Social Democrats won the city elections and governed it between 1918 and 1934, earning the city the nickname ‘Red Vienna’.

Among the many initiatives taken by the Social Democrats to make life easier for the Viennese, social housing is one that stands out and makes the city famous to these days. The flagship project by far is the Karl-Marx-Hof, the iconic building located in Vienna’s 19th district.

Karl-Marx-Hof was built between 1927 and 1930 by city planner Karl Ehn, a follower of Otto Wagner. It contains 1,382 apartments (with a size of 30–60 m² each) and was designed for a population of about 5,000. At over a kilometer in length and spanning four tram stops, Karl-Marx-Hof is the longest single residential building in the world.

An article on the building and its inhabitants that appeared in New York Times in 1991 identifies what set the new housing units apart: ‘Three things made Karl Marx Hof special in the Vienna of the 1930’s: each apartment had a toilet and cold running water, and the complex had balconies. Until then, public housing projects had only communal toilets and communal cold water taps. The balconies were considered an aristocratic luxury that went far beyond the needs of the workers’.

The building is politics made concrete, literally. Its name, its size, its color (red), its promise for a better life, are a socialist’s architectural manifesto. (Ra)