Katie Sandwina, the strongest of them all 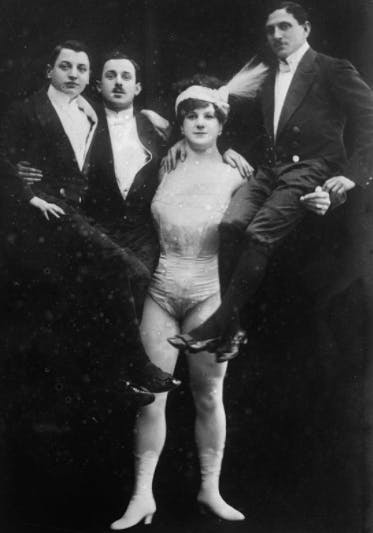 When you think of the strongest and most muscular Austrians, it is likely that Arnold Schwarzenegger comes to mind. But there have been other extraordinarily strong people in the past, one of whom is Katie Sandwina. Born Katharina Brumback in Vienna in 1884, she was one of 14 children born to her circus performer parents, and she was known for regularly beating men in competitions of strength. Both of her parents also performed impressive feats of strength, and she began performing with them at a young age. Her father often offered 100 marks to any man who could beat her in a wrestling match – and many men tried, but none succeeded. By the time she was an adult, she stood over 6 feet tall (183cm), and was 200 lbs (90kg) of pure muscle.

As part of her regular performance, she often challenged audience members to a weight-lifting contest. The most spectacular of these was at a show in New York, when the audience was shocked to see Eugen Sandow take up the challenge. He is today still considered the father of modern bodybuilding, and was a farmous strongman at the time, known for his incredible feats of strength. It was widely assumed that Katie couldn’t win, but she was unfazed by the challenge. In front of an audience of hundreds, she lifted ever-heavier weights, and Sandow matched her weight for weight – until they got to 300 lbs (136kg). Katie calmly pressed the weight overhead with one hand; Sandow meanwhile could only lift it to his chest. With that, she had beaten one of the world’s strongest men, and changed her last name to Sandwina to commemorate the achievement. After retiring in 1945, she opened a restaurant with her husband, where she was known to occasionally entertain the guests by bending steel bars and hoisting her husband overhead! (C.G.)