Mary Vetsera and the man who stole her bones 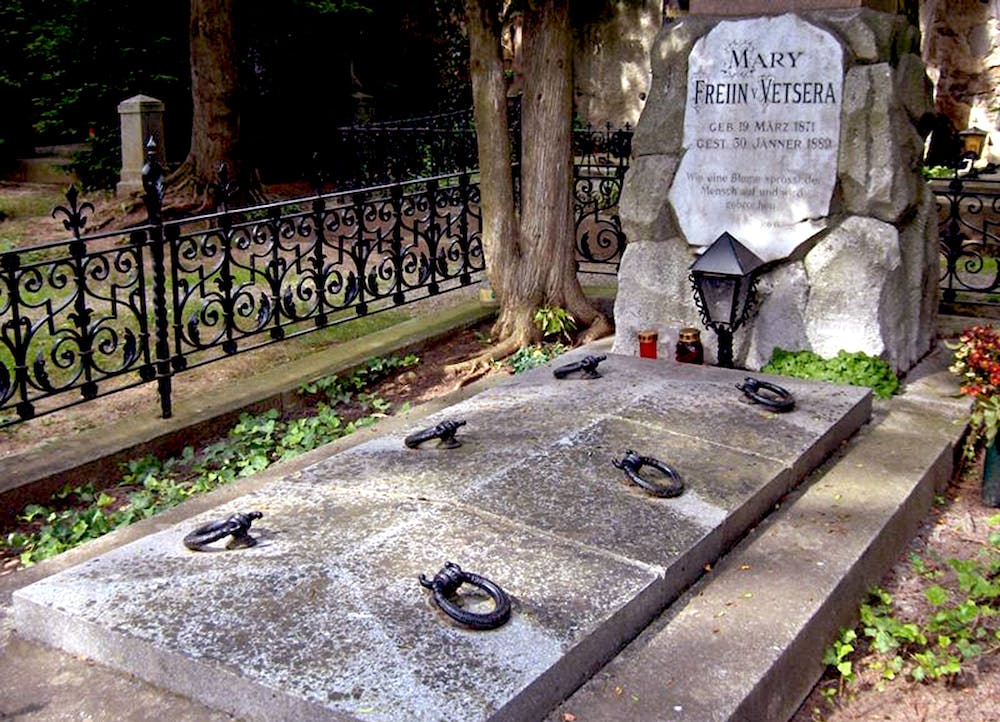 It was one of the most exciting stories of his life. A stranger entered and declared to the writer George Markus that he was “in possession” of the remains of Baroness Mary Vetsera. Then he opened a red briefcase, took out a skull and laid it on the desk. “That’s Mary,” he said. The man introduced himself as Helmut Flatzelsteiner, a furniture dealer by profession in Linz. Then he handed Mr. Markus several forensic reports, which dealt with the demise of a woman who had died about 100 years prior. According to the certificates, the unnamed person had remarkably long hair, was 162 cm tall and 18 years old at the time of her death. All this had been determined by the medical expert Mr. Flatzelsteiner had commissioned. Apart from skull and skeleton, the reports also described clothes and shoes typical of a young aristocrat of her time.

Helmut Flatzelsteiner stated that two Burgenlanders had bought the coffin of Mary Vetsera, who had died in January 1889 together with Crown Prince Rudolf in Mayerling, for 30,000 shillings. The Burgenlanders claimed to have stolen the remains from the crypt in Heiligenkreuz near Vienna on a foggy night. Of course, George Markus did not believe Mr. Flatzelsteiner and took him to be a madman. But when he began to compare the dates of the dead with those of the Vetsera, he realized that many things were the same: the Baroness died about 100 years ago, she was rather small and 18 years old at the time of her death. She had long hair and was buried in the clothes she died in.

Mr. Markus knew that he could not solve the case on his own. That’s why he brought in the well-known Professor of Pathology, Hans Bankl. Professor Bankl looked first at the medical certificates, then the photos that Flatzelsteiner had taken of the skeleton and the garments, and after much deliberation, Bankl said: “I can imagine that this is indeed the skeleton of Mary Vetsera!” George Markus then wrote a newspaper report on the obvious criminal case of grave robbery, and before publication informed the Viennese police about the case. The following day the police ordered the Vetsera tomb at the cemetery in Heiligenkreuz to be immediately opened.

Reporters and television crews from around the world attended the event on December 22, 1992, and at noon it was clear, the grave was empty! Mary’s bones were actually stolen. During his subsequent interrogation at the security office, it turned out that Helmut Flatzelsteiner had not “bought” the skeleton, as originally claimed, but had himself commissioned two men to fetch Mary Vetsera from her grave. A quarter of a century later, Mr. Markus called Mr. Flatzelsteiner, who is now almost 80 years old and retired. No, he would not object to George Markus writing again about the “Vetsera Case”, said the man who was called the “Crypt Thief” and caused a worldwide sensation. Mr. Markus asked him why he did it. “I’ve been interested in history since my youth,” he replies, “and that’s still the case today”. At that time he was concerned with solving “the mystery of Mayerling”. “Historians and medics have tried that before me, but they never succeeded,” said Flatzelsteiner. He had learned that the Heiligenkreuz Cemetery had refused any and all requests to ever open the grave, so he decided to take matters into this own hands. And indeed, he did manage to shed some new light on the case, though by unorthodox and highly inadvisable means. That is because for over 100 years, the cause of Mary Vetsera’s death had been a matter of speculation, but after discovering the missing bones in December 1992 forensic experts were able to prove that the lover of Crown Prince Rudolf “was killed by a shot in the skull”. The fact that the son of the Emperor was the perpetrator was something that the royal family wanted to keep quiet. Helmut Flatzelsteiner escaped trial for disturbing the dead since the bones of Baroness Mary Vetsera had been put back in the crypt. Further forensic examinations were not approved by Stift Heiligenkreuz — and so the bones remain in their resting place, but Mary Vetsera’s death and disturbed sleep continue to fascinate until this very day!  (R.H.)

**Adapted from the article written by Georg Markus for Kurier.at: https://kurier.at/chronik/oesterreich/das-verschwinden-der-mary-vetsera/301.444.084