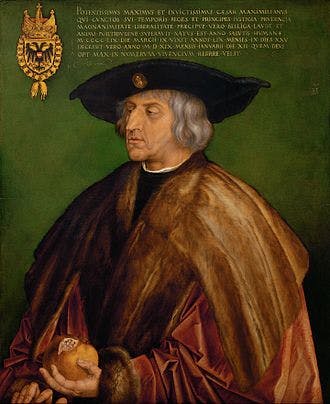 The Kunsthistorisches Museum Wien is among the best art museums in the world, hosting the 4th largest collection of paintings, the largest collection of Egyptian papyri, art objects from Greek, Roman, Etruscan and other early cultures, as well as the crown jewels of the Holy Roman Empire of German Nations, Austria, Hungary, Sicily. As most of its treasures were gathered by the Habsburg family, it gives a good measure of their reach in global influence across the centuries.
As you enter the paintings gallery, the first painting on the left is called: ‘Emperor Maximilian I with His Family’. It depicts Maximilian, his first wife Mary of Burgundy and their son Philip the Fair. Below them are Philip’s sons Charles and Ferdinand. To the right of them is Louis of Hungary, who Maximilian had adopted in 1515.
The painting is both beautiful and totally deceiving in the simplicity implied by its title. With Maximilian, the Habsburgs took their dynastic play to a global level using two main strategies: wars and marriage. But mainly marriage. The painting was done in 1515, during the first Congress on Vienna meant to stabilise relationships between Austria, Hungary and Poland. And the preferred stabilising agent of the age was marriage. A double wedding wad organised during the Congress, bringing Bohemia and Hungary under Habsburg control until 1918. When the picture was made, Mary had long since died. Philip had died too. Maximilian was married for the third time and had more than a dozen children and grandchildren. But this painting summarises the projection of his legacy: Mary is the only one he loved. Philip, their first borne, had 6 children. In the painting we see only two, Charles and Ferdinand. Both would be Emperors of the Holy Roman Empire.
In the same room in the Museum, probably the most famous painting is a portrait of Maximilian made by Dürer. It was made in 1519 during his last ‘battle’, the struggle to ensure the succession to the imperial throne for his grandson, Charles. The portrait shows an aged and tired Maximilian. He is 60. All his life he dreamt big and spent bigger on war, art and weddings. (Dürer was under his patronage). In the last years of his life he was travelling with his coffin, afraid that the ‘French disease’ that was eating him alive would finish him off on the road.
Photo credit: Wikipedia
Tweet
Email this page to a friend. Email
Click here to visit previous post ← Previous Post Click here to visit next post Next Post →
Skip to toolbar