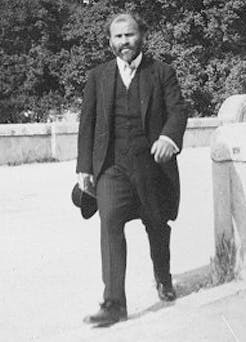 Gustav Klimt is a legendary figure in Vienna these days, though he was already well-known in his lifetime – not only for his art, but also for his many lovers and the affairs he had with his models. One of these was Maria Zimmermann, who was not only a muse, but the mother of two of his children. She died in 1975 at the age of 96, but recorded an interview with her 13-year-old granddaughter 6 months before her death. This recording has only recently become available and provides a unique insight into one of Vienna’s most storied artists and one of the women in his life.

In the recording, Zimmermann recounts how she met Klimt by chance as she walked along Josefstädterstrasse one evening when she was 18, and how she agreed to let him paint her. Klimt was 35 at the time, and Zimmermann considered him the greatest love of her life, despite knowing that she was not his only girlfriend. He rented an apartment for her in Tigergasse, near his Atelier, where she lived a rather modest life – much like Klimt himself, who she remembers as living very modestly while also placing great value on always being elegantly dressed. Klimt was also a great animal lover, which becomes apparent in an anecdote she tells of Klimt encountering a horse-drawn carriage: the horse was struggling to pull the carriage up the Spittelberg but could not make it up the hill. The carriage driver hit the horse with his whip, which prompted Klimt, in formal evening attire, to rip the whip out of the driver’s hand, reprimand him, and push the carriage himself to help the horse – and this is how the horse and carriage made it up the hill.

Maria ultimately bore Klimt 2 sons, Gustav and Otto. She and Klimt were never an official item, but even after so many years, she spoke of him lovingly. Although she remained out of the spotlight, it is thought that the painting Hope I was partially inspired by her and the early death of their second son, Otto. (C.G.)

Information for this story was taken from https://kurier.at/kultur/klimts-geliebte-spricht/307.523.783 . Photo credit: Klimt Foundation.