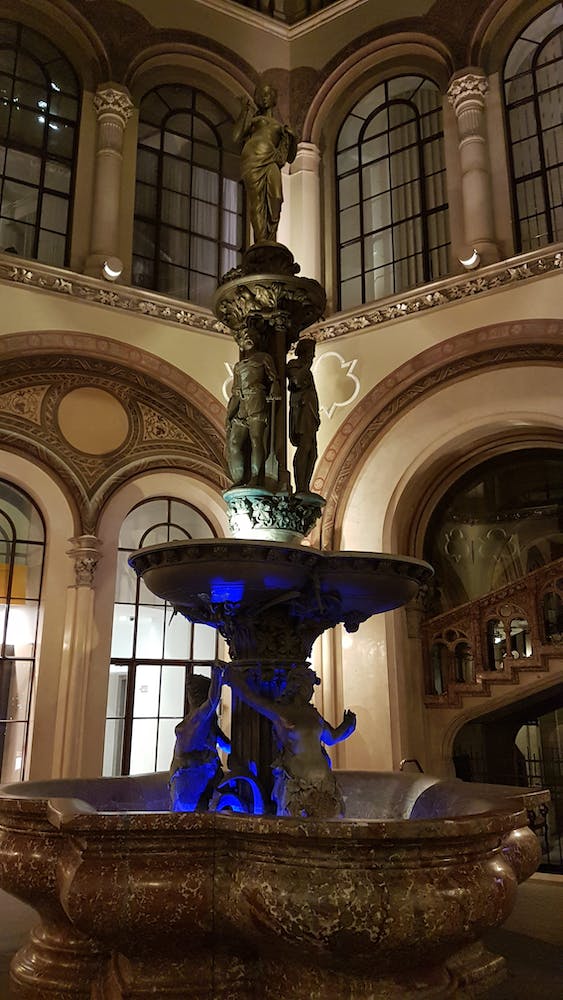 As we mentioned in another story recently, one of the unique features of the Palais Ferstel is the covered shopping arcade that runs through it, and is open to the public. At the time it was built, this passage was intended to be something like a bazaar with many small merchants selling their wares – a rather novel idea for Vienna at the time. Ultimately, it was inspired by and took on more the qualities of the grand Parisian shopping arcades of the time, but it is still commonly called the “Basarplatz” (Bazaar square) harkening back to this original intent.

Towards one end, the glass-covered shopping passage opens up into a hexagonal space adorned with red and yellow wall detailing, and centered by a delicately charming fountain. This is known as the Basarhof (Bazaar Courtyard), and the fountain at its center is the Donaunixenbrunnen (Danubian Nymph Fountain). It stands 6 meters tall, and pays tribute in each of it’s elements to the water and its many uses. At the bottom, three nymphs play in the water overlooked by three figures in the center of the fountain who represent the trades of the Danube: a merchant, a shipbuilder, and a fisherman. Above all of them rises another Danube Nymph, a semi-nude female figure who is clutching a small fish in her right hand. Although your SV explorer could not find a definitive answer as to why a fountain dedicated to the Danube would be built within the bank and stock exchange building, it presumably has some connection to the early trading and financial livelihood of the city in which the Danube played a big part! (CG) 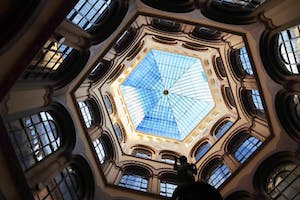