On the line, and other euphemisms for prostitution in Vienna 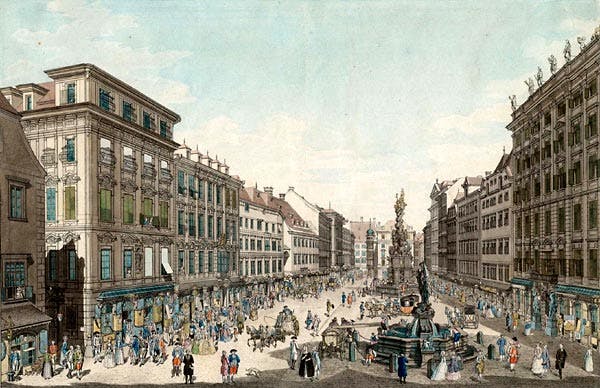 They say its the oldest profession in the world, and in Vienna it has quite a history. On the whole, prostitution has been widely tolerated if not always embraced in Vienna and, despite crackdowns after a syphilis outbreak in the 16th century and under the staunchly Catholic Maria Theresia (which may also have had something to do with her own husband’s philandering ways) in the 18th century, by 1820 there were supposedly some 20,000 prostitutes working in Vienna – which would have been a whopping 8% of the population at the time!

Today, the area where prostitutes can generally be found is called the “Strich” (the line) in Viennese German, but where did this expression come from? There is no definitive answer but it is thought that it originates from the late 18th century, when policies surrounding prostitution were relaxed after the reign of Maria Theresia. During that time, prostitution established itself as a booming trade in the Graben – and, though it had been legalized, prostitutes were restricted to areas behind an outlined demarcation…and thus the euphemism “auf dem Strich gehen” (to go on the line) for prostitution was likely born. A separate and lesser-known euphemism also sprung up around Spittelberg, at the time still outside the city walls, and home to a thriving prostitution scene in the 18th century. The women here came to be called Bierhäuselmenscher (beer house people), and even some of the imperial family were rumored to have frequented their establishments! (C.G.)