Otto Wagner and the Majolikahaus 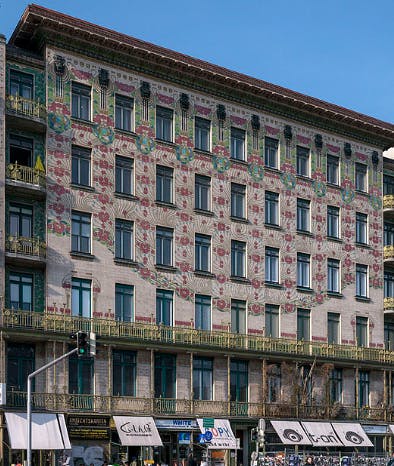 The Linke Wienzeile is home to many impressive buildings, but one of the most eye-catching has to be the Majolikahaus with its elegantly cheerful flower facade. It is located next to another impressive but slightly more subdued Otto Wagner building, and together with yet another Otto Wagner building just around the corner, it is known as one of the “Wienzeilenhäuser” (Houses of the Wienzeile). All three of these buildings were built in the closing years of the 19th century as part of Wagner’s ultimately unrealized vision to turn the Wienzeile between Karlsplatz and Schönbrunn into a grand boulevard lined with stately buildings.

The Majolikahaus was built in 1898 and derives its name from the floral tiles that adorn its facade. Majolika refers to colorful tin-glazed Italian ceramics from the 15th and 16th century, though over time it has come to also refer to colorful ceramics more broadly. The Majolikahaus is also the only realized example of the type of multi-colored facades that Wagner promoted. The tiles are not only beautiful, but also very practical and functional in accordance with  Wagner’s architectural philosophy and ideas about modernity: they are weather-resistant and easy to clean, which has ensured that they have stood the test of time! (C.G.)