Otto Wagner’s bathtub made of glass 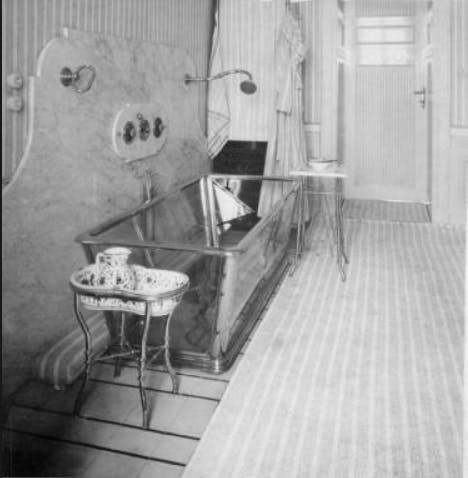 We recently told you about the Majolikahaus near the Naschmarkt, which is surely the most noticeable of the Otto-Wagner-designed houses of the Wienzeile, but its siblings also have stories to tell. Of the three ‘Wienzeilenhäuser’ that Wagner built at the end of the 19th century, the house located at Klöstergasse 3 is probably the least spectacular at first glance. While its 2 slightly older siblings are located directly on the Wienzeile, this building not only has a more discrete façade, but also a more discrete location around the corner from the much-visited Wienzeilen. Perhaps this was not entirely accidental, as this was the only building of the three in which Wagner himself actually lived from time to time.

One of the most remarkable elements of the apartment that Wagner designed for himself at Klöstergasse 3 was the bathtub. Despite being at the height of his career and design aesthetic, Wagner was always conceiving of new and more modern ways to reconceptualize everyday goods – and that included his bathtub. You see, Wagner was not content to bathe in an ordinary tub. No, he designed himself a bathtub made entirely of glass! Even Adolf Loos, famous for his sharp and biting critiques of many of his contemporaries, is said to have proclaimed the bathtub to be ‘a jewel’ upon seeing it. Unfortunately, the bathtub has been lost to time but some photos of it remain – none though, it should be noted, in which the architect himself is having a soak! (C.G.)