Street Scales and the Nature of Shame 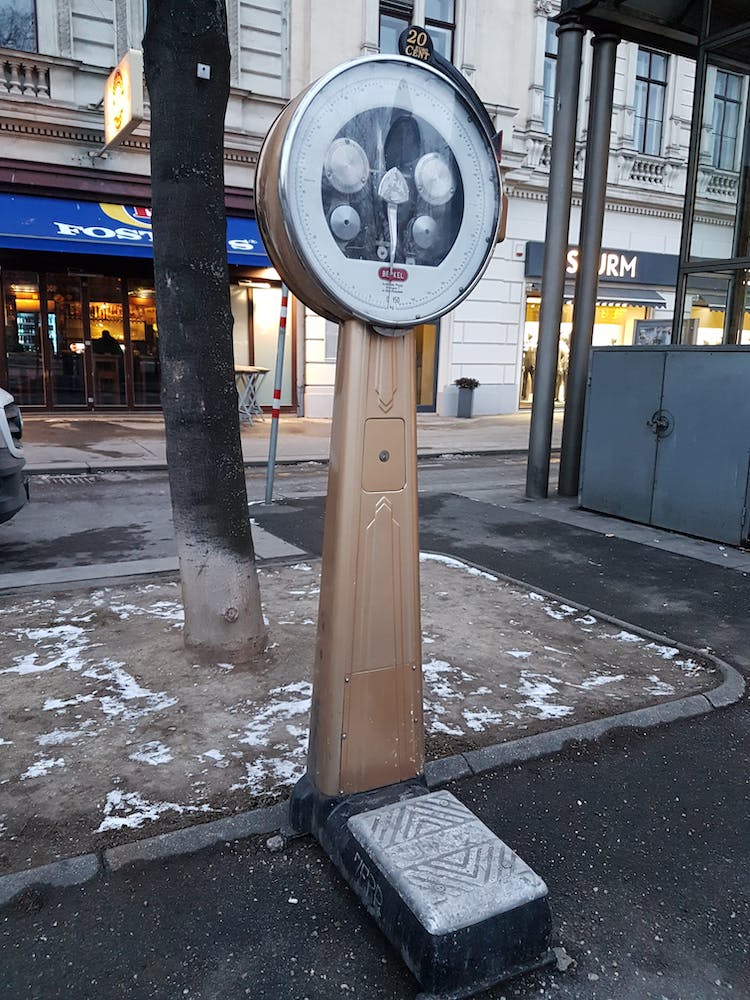 One thing you may notice when strolling around Vienna are street scales scattered here and there, offering to give you a very public weigh-in for a bargain price of 20 cents. There are more than 100 of these around the city, usually near subway stations or around large intersections. If you’ve lived in Vienna long enough you likely just march right past this odd piece of street furniture, but at some point you probably also vaguely wondered what the deal with them is. And in fact, they have quite a history.

The first such scales in Vienna date back to 1887, when they were first shown as part of the 40th anniversary of Kaiser Franz Josef’s ascent to the throne as an example of Austrian achievement in manufacturing. During the celebrations for the anniversary, which included a presentation of Austrian industrial achievements in the Prater, one of the attractions was a scale produced by C. Schember & Söhne, where members of the public could insert a coin to get their weight. These scales were some of the earliest coin-operated machines in existence, and originally cost 3 Kreuzer. These were coins used in the Habsburg empire which had a cross (kreuz) on them, quickly earning them the name Kreuzer. Some of the early street scales also included a mirror, allowing people to not only check their weight but their overall appearance. Although this new machinery was regarded with fascination and spread quickly throughout the city in the interwar years, they were also already from the very beginning the subject of jokes and satire around members of the nobility weighing and inspecting themselves on a public street.

Nonetheless, the street scales coincided with an emerging concern for health, fitness, and a new beauty aesthetic that prized slimness. Thus, the scales became a part of daily life, though they really only boomed in the post-war period – especially once the immediate poverty of the war have been overcome. They were marketed as a useful tool for people to check their health, and helpfully included ‘ideal’ weights for different gender and age groups. However, by the 1970s, attitudes around public weighing had changed; most people had scales in their homes by this stage, and one’s weight became a private and more shameful affair. Street scales began rapidly disappearing, but one kind managed to survive in Vienna: the Berkel scale. Today they take Euro cents instead of Schilling or Kreuzer and are rarely used, but they have stood the weighty test of time. So if ever you have a sudden burning desire to know your weight while out and about, the trusty Berkel is there for you. For a fee, of course! (C.G.)