Take a stroll at the Reumannhof 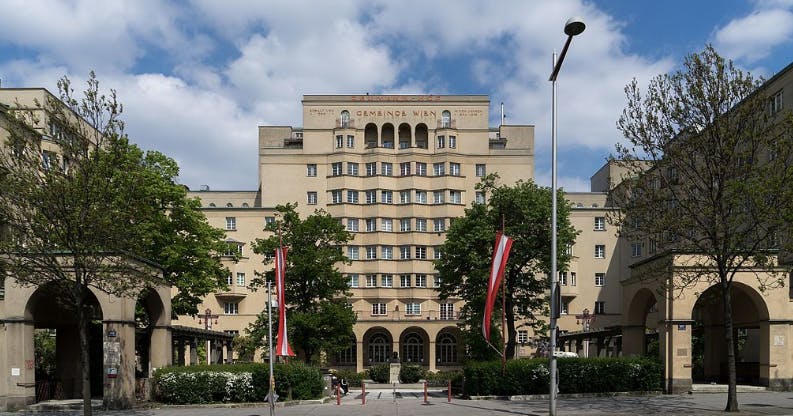 Gazing out the window on an afternoon ride on the #6 tram, depending on which side you are sitting on, you may slowly roll past a large and impressive social housing building on the Margaretengürtel. It looks much like other social housing buildings, though the size and style of it captures the attention more than most. You may wonder what the name of the building is, and will soon be rewarded with the answer: festooned across the facade are letters spelling out Reumann Hof. It was built from 1924-1926, and much like the Reumannplatz, is named after Vienna’s first Social Democratic mayor Jakob Reumann. The building facade borrows its architectural cues from castles and palaces, reinterpreting bygone grandiosity for the new working class. The pomposity of the external architecture clashes with the internal design though: the 470+ apartments within the building are modest and small, a common critique or Reumannhof residents.

If you have some time to spare, we recommend that you get out of the tram and take a wander through the courtyard of the Reumannhof. Not only will you find a memorial plaque to commemorate the role of the building in the short Austrian Civil War of 1934, but you will find many small architectural and artistic flourishes throughout the grounds. (C.G.)