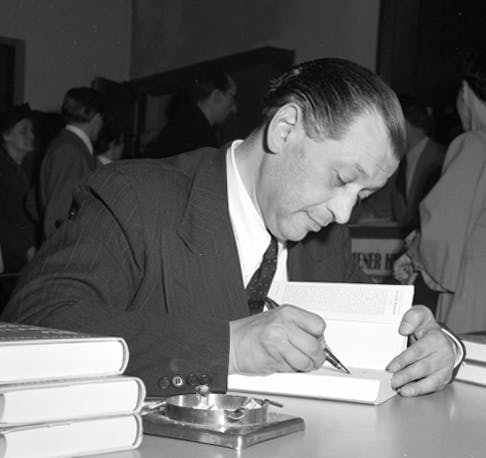 Every place has its literary traditions, and Vienna even more than most. As a diverse and multi-cultural center of culture at the end of the 19th and beginning of the 20th century, there was no shortage of imagination and creativity in the city, much of which was cultivated through the intellectual and artistic scenes that flourished around this time. And while this is perhaps the era best-known for its literary output, it was not entirely snuffed out by the wars but managed to set down some roots that flowered only in the decades to come.

A prime example is the writer Friedrich Torberg, born in Vienna to a Jewish-German family, and known for his amusing and anecdotal stories. Born in 1908, the family later moved to Prague in 1921, and he received Czech citizenship a few years later. This would help him later when, after the Anschluss, he found himself in France and was able to avoid internment during the early years of WWII as a Czechoslovakian citizen. This luck followed him when he left Paris 2 days before it was occupied by German troops, and managed to enter Spain just hours before the border was closed. From there, he made his way to Lisbon where he was able to get a visa in order to emigrate to the USA. By 1951 he had however moved back to Vienna, where he would remain.

Although he was already an established author, it wasnt until 1975 that he published his first Tante Jolesch book, entitled Tante Jolesch oder der Untergang des Abendlandes in Anekdoten (Tante Jolesch or the Demise of the Occident in Anecdoes), in which he provided a colorful and charming account of Jewish life in Vienna, Prague, and Bad Ischl around 1900. In Tante Jolesch, Torberg quotes fellow Czech author Egon Erwin Kisch as having said, just before the outbreak of WWII, “You know, nothing can happen to me. I am German. I am Czech. I am Jewish. I am from a good family. I am a Communist…one of these things always saves me!” To which Torberg later countered, “I am a Jew. I live in Austria. I was an Emigrant. I don’t like Brecht…one of these things always does me in!”.