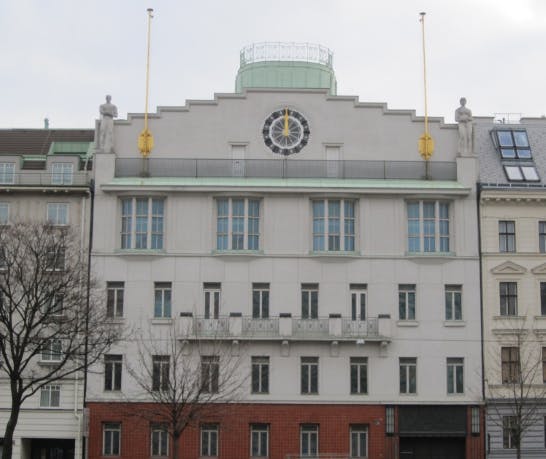 Along the Rechte Wienzeile, you may have noticed a rather stark and austere building crowned by an eye-catching clock sandwiched between a male and female statue. It is known as the Vorwärts-Gebäude and was built between 1907 and 1909 by the brothers Franz and Hubert Gessner, both of whom were architects. The statues that keep guard at the top of the building, added in 1910, are a representation of a male and female worker. The Vorwärts-Gebäude takes up a significant amount of real estate along this part of the Wienzeile, which is an area of Vienna that has long been populated. This meant that in order to make way for this new building, older houses that had previously stood there were torn down. Among them was the birth house of Hans Moser, one of Austria’s most famous actors.

However, Hans Moser is by far not the only famous personality to be connected to the building. As it was the home of the Social Democratic Workers Party, which later became the SPÖ, Victor Adler had his office there and was visited there in the years leading up to the First World War by the Russian revolutionaries Leon Trotsky, Nikolai Bucharin, and Vladimir Lenin. And if it sounds a bit like even the name of the building could be a political slogan (Forward Building), that is not entirely by chance: indeed, the name Vorwärts-Gebäude comes from the Vorwärts-Verlag (Forward Publishing Company), which had its offices in the building, published the Arbeiter-Zeitung (Workers Newspaper), and was closely associated with the Social Democratic political movement at the time.

Today, the building is true to its roots: it is home to the History of the Labor Movement Association, the archive of the prominent feminist and SPÖ politician Johanna Dohnal, and the Bruno Kreisky Foundation.