The Luck of the Chimney Sweep 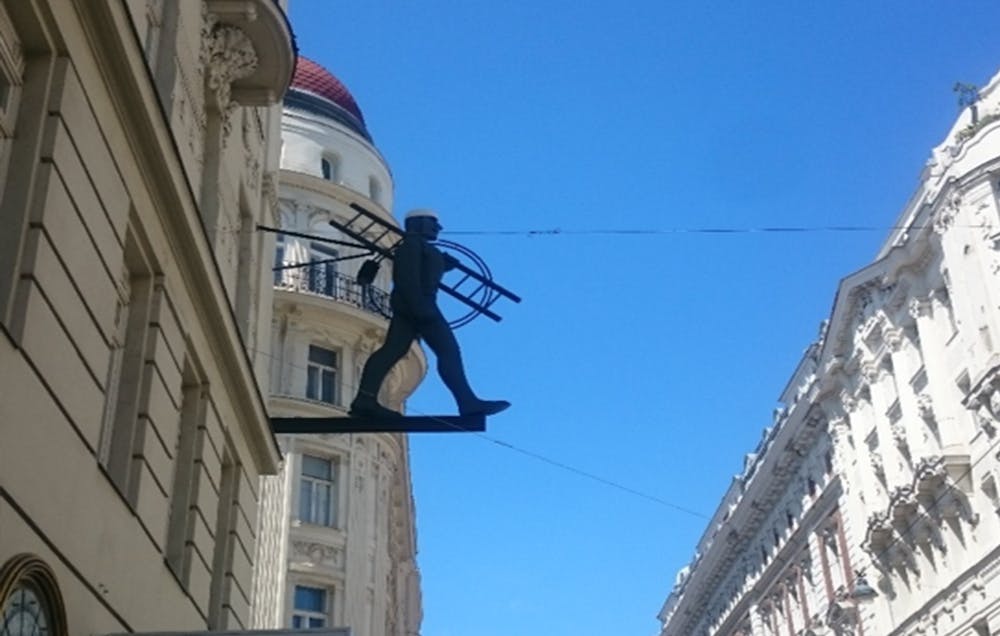 So, remember the large chimney sweep mentioned in the Hohe Brücke story?

He can be found jutting out over the street with his ladder and flue brush at Wipplingerstrasse 21, just next to the Hohe Brücke. While real chimney sweeps can still regularly be seen walking around town, this large representation of a chimney sweep actually has nothing to do with cleaning chimneys. Instead, and disappointingly, he is merely an advertising logo for the licensed lottery company Hohe Brücke, which belongs to the Austrian Lottery Foundation.

However, even this corporate advertising has a few secrets to tell. Why would a lottery company have a chimney sweep as an advertising logo? Well, it’s because chimney sweeps in Austria have long been seen as bringers of good luck – something one generally needs to win the lottery!

This goes back to the Middle Ages, when life was organized around fire and chimneys as a source of light and warmth in the winter. While chimneys provided comfort within the home, they also presented a constant danger. If the chimneys were not cleaned regularly, poisonous gases and spontaneous fires could break out, often with fatal consequences. Wives were therefore constantly nagging their husbands to clean out the chimney, but this was difficult and often also dangerous work for people who were not properly trained.

Thus, it was considered great luck if a chimney sweep happened to be walking by, who would do the work professionally and for relatively little money. The danger would be gone for a while, your wife would stop bothering you about it, and you didn’t have to blame yourself for anything that went wrong during the cleaning process – an excellent and lucky solution!

But, it wouldn’t be Vienna if the venerable chimney sweeps didn’t also allegedly have the Kaiser and Imperial Court to thank for their reputation. The story goes that the K&K chimney sweep, who was responsible for cleaning the imperial chimneys at Schönbrunn Palace, once heard about a plot to kill the Kaiser while working inside a chimney shaft. He alerted the Imperial house of these plans, thus foiling the plan and saving the Imperial family. Is this story true? We don’t know, but it helped cement the reputation of chimney sweeps as bringers of luck and good fortune in the minds of the Viennese!