The mysteriously missing U5 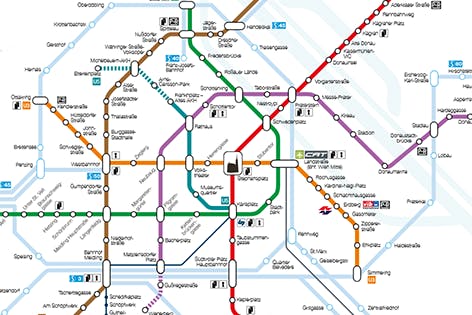 The mysteriously missing U5

If you often take the subway in Vienna, you may have noticed that there are only 5 lines, but they are named the U1, U2, U3, U4, and U6. So can the Viennese just not count correctly, or what happened to the U5? In fact, ever since the early days of planning the Vienna subway network in the 1960s, there has been a plan to have a U5 line, but the early plans for this line always proved unworkable and were then abandoned. Early plans for this line would have seen it going from Meidlinger Haupstrasse to St. Marx along the southern part of the Gürtel but this was never realized. Later, the U5 was designated as the track from Schottentor to Stadion, but this ultimately just became an extension of the U2 rather than an entirely new line. As such, the U5 continues to be absent from the subway map.

Over the years there have been many plans and designs developed for the U5, but they did not become really serious until 2014. In that year plans to actually begin building the line were approved, with building scheduled to start this year. However, that was later pushed back to 2019, and the line is not expected to be operational. In the first building phase, the U5 will replace the U2 from Karlsplatz to Rathaus, and will then go out into the 18th district. As a result, the U2 will also be re-routed out towards the south of Vienna instead of ending at Karlsplatz as it currently does. Following a public opinion poll in 2014, it was also decided that the color of the new line would be turquoise, which some 65% of respondents preferred to the other option, pink.  Therefore, although there may be some skepticism surrounding the delayed construction start of a line that has so often not been built, in a few years time you should no longer have to explain the strange numbering of the ubahn lines to your visiting family and friends!