The origins of Hanswurst 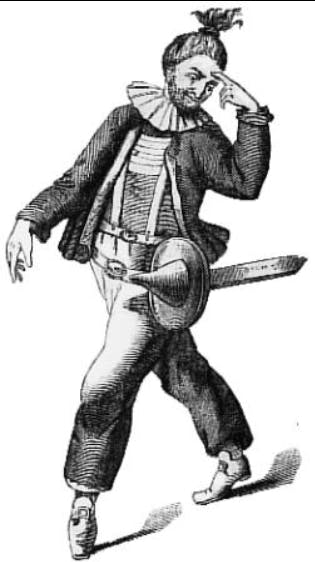 Everything has an end, only the wurst has two! Perhaps you have heard this Austrian expression…of course, Austria is known for sausage, but its not the only kind of wurst that has claimed its place in history. One of the earliest and most theatrical of these is the infamous Hans Wurst, a comic figure who became popular in the stage traditions of German-speaking comedy in the 16th and 17th centuries. Richard Pischel describes the figure of Hans Wurst as ”…a half doltish, half cunning, partly stupid, partly knowing, enterprising and cowardly, self indulgent and merry fellow, who, in accordance with circumstances, accentuated one or other of these characteristics.”

Although the character of Hans Wurst had been around for some time, he was most emphatically embraced at the beginning of the 18th century, when the Austrian actor Joseph Anton Stranitzky further developed and popularized the role on the Viennese stage. In fact, this has been cited as the beginning of Viennese popular theater. Stranitzky’s Hans Wurst was conceptualized as a peasant from Salzburg with an often crude and sexualized sense of humor – which proved to be enormously popular among the Viennese masses! Not everyone was so enamored by this coarse kind of humor though; in the 1730s there was a so-called “Hans Wurst dispute”, in which there was an attempt to banish this buffoon with his apparently objectionable humor from the German-speaking stage. Whereas it met with some success in Germany, there was strong resistance in Vienna…and though Wurst lost his popularity over time, his legacy lives on in the popular theater and cabaret scenes of the city! (C.G.)