The Russian orthodox cathedral of Vienna 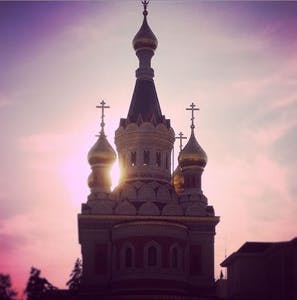 St. Stephen’s Cathedral is probably the most famous building in Vienna. But few people know that it is not the only cathedral in town. Take the splendid Russian Orthodox St. Nicholas Cathedral, for example. It is located in the third district of Vienna, in the heart of the city’s diplomatic quarter.

It was built between 1893 and 1899 according to the plans of Russian architect Grigory Ivanovich Kotov right next to the Russian embassy. The costs were largely paid by none other than Tsar Alexander III. However, after the Russian Orthodox community, which had long been present in Vienna, finally had its own church, the fate of the building soon took a rather sad turn. When on the eve of the First World War the diplomatic staff of the Russian embassy was withdrawn, the church was closed. In the years that followed it served as a storage room and was temporarily used by the music school of the city. Only after the Second World War the building was returned to its original function. Shortly thereafter in 1962 it became the seat of the bishop of the Eparchy of Vienna, and was thus elevated to the rank of a cathedral. But the turbulent history had left its traces. Roofs and facades were damaged and the building was threatened by moisture. In 2003-2008 the danger was averted by extensive renovation works. On this occasion the artist Archimandrit Zenon created a fresco cycle based on traditional Russian-Byzantine models spanning an overwhelming 1500 square meters, turning the cathedral into one of the most beautiful churches of the city. Interesting fact: It is not only the appearance of the church that transports visitors to Russia. For the construction of the building, 30 loads of Russian soil were transported to the Austrian capital and served as the subsoil of the cathedral. (CH)