The Saliera: A Very Special Tableware 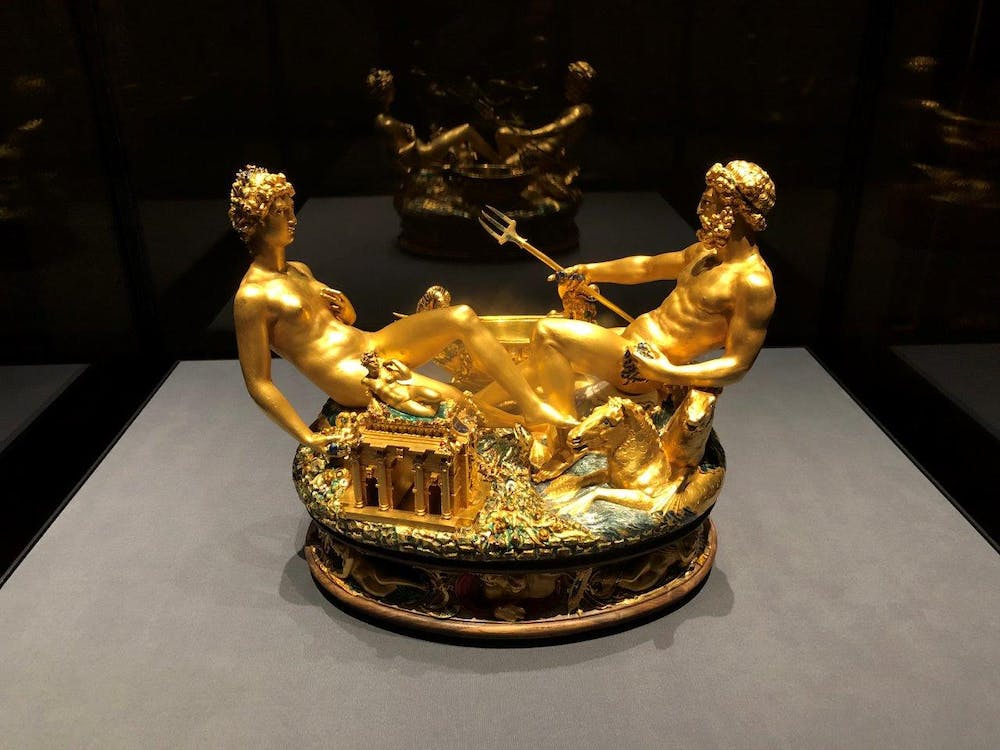 On 11th of May 2003, a sound of broken glass cut through the thick, deafening quietness of a typical Viennese Sunday and it was registered on the radars of global news outlets. The New York Times informed its readers that: ‘intruders broke into Vienna’s art history museum before dawn on Sunday, stealing a 16th century gold-plated sculpture by the Florentine master Benvenuto Cellini’. The sculpture was the Cellini Salt Cellar, also called the Saliera (Italian for salt cellar).  Considered ‘the Mona Lisa of sculpture’, the Saliera is not your usual tableware. Cellini, a famous late Renaissance artist with an exotic life, created the object in 1543 for King Francis I of France. The sculpture is an allegory of the world: two beautiful bodies slightly touching each other depict the gods of sea and earth. Salt and pepper come out of their jolly interaction. Back then salt was a monopoly of rulers and pepper was a symbol of global trade. Cast this metaphor in gold, throw in few more symbols and you end up with a happy ruler.

The Saliera entered the Habsburg treasury as a gift from Charles IX of France to Archduke Ferdinand II of Tyrol, who had represented Charles in his proxy wedding to Elisabeth of Austria. In the 19th century the sculpture was transferred from Ambras Castle in Innsbruck to the Kunsthistorisches Museum in Vienna, where it would stay more or less untouched until that wretched Sunday morning.

The disappearance of the Saliera, evaluated to be worth ‘anywhere between 50 million dollars and a nine figure amount’, set in motion an international hunt which lasted for almost three years. In October 2005, the company who had insured the object received an SMS asking for 10 million euros in exchange for the piece. They received also the Sea God’s trident as proof of the possession.

After several failed attempts to identify the sender (for each communication he was using different phones bought at different moments in time), the police received one message sent from a phone just bought from a shop on Mariahilferstrasse that had video surveillance.

The police published the photos of the buyer and eventually a 50-year-old specialist in security-alarm systems gave himself in, informing police about the place in a park in Vienna where he had hidden the Saliera after keeping it hidden under his bed for two years.

The object was displayed again in the museum after a few weeks of restoration. Some of the scratches produced when its glass box was broken are still visible, left to tell this story of the sculpture’s life. May they tell it for at least another 500 years! (Ra)