The Spanish Flu from America 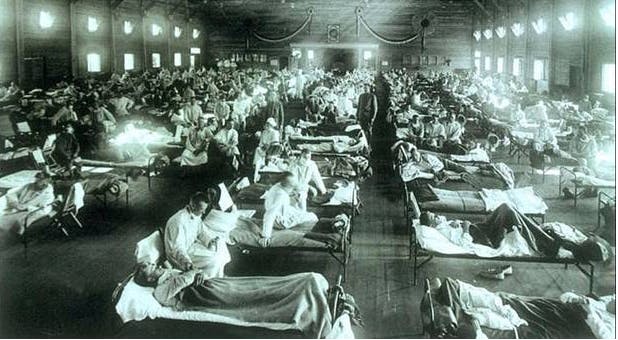 This year it is exactly 100 years since the great Spanish Influenza epidemic of 1918, which killed some 25 million people worldwide – including around 20,000 in Austria. Although it is known as Spanish influenza, it likely originated in the United States and was transported by American soldiers to Europe in the last years of the First World War. Nonetheless, it came to be very closely associated with Spain. This was because Spain remained neutral during World War I while most of the rest of Europe and North America were engaged in prolonged warfare. Although significant numbers of people were dying from flu-like symptoms across Europe, most governments did not want to publicize this fact for fear of military disadvantage, so news reports of illness and death were underreported and censored. As a result, most of the news about the influenza came from Spain, where the press regularly reported of illnesses and deaths, creating the false impression that the epidemic was largely confined to Spain.

Like much of Europe, Vienna also suffered from the Spanish flu, which killed several thousand people in the city in the last quarter of 1918 alone. The form of influenza was particularly brutal, with people dying within days or sometimes even hours of their first symptoms. Ultimately, the victims of the Spanish influenza actually drowned as a reddish liquid filled their lungs and a lack of oxygen slowly turned their skin from blue to black. Especially troubling was the fact that an unusually high proportion of the victims of the Spanish flu were otherwise healthy individuals in the age range 20-40, who have strong immune systems and are generally less vulnerable to such diseases. However, it is theorized that older generations had some partial protection from exposure to an earlier flu pandemic in the late 19th century, and were therefore less affected by the Spanish flu than normally would have been the case.

In Vienna it was originally thought that the “Spanish sickness” was due to sudden weather changes and large changes in temperature in the summer of 1918. However, it quickly became clear that the weather was not the true culprit – nonetheless, in the difficult conditions at the end of the war, both medication and any kind of effective disease management were in short supply. This helped contribute to the deadliness of the disease, though the official number of people who died of influenza in 1918 and 1919 in Vienna is relatively low; on the other hand, the number of people recorded as dying of a lung infection is comparatively high, implying that many of those with lung infections actually died of the flu. Among them was the noted Viennese artist Egon Schiele, who was a remarkably prolific painter for the fact that he died at the young age of 28 in October of 1918. (C.G.)