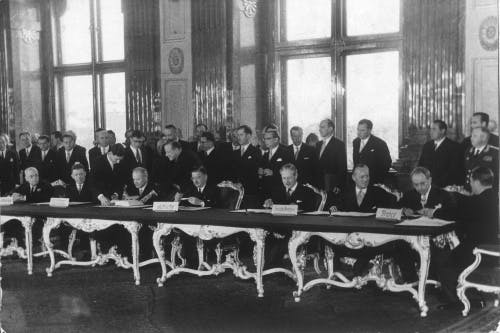 In order to find out more about the mood in Vienna at the end of 1955, this SV explorer searched the archives and found a long ‘Letter from Vienna’ sent by the correspondent of The New Yorker magazine to his American readers back home in November 1955.

From this letter we find out that the actual celebration of the independence took place on the 22nd of October, when people from all over the country were invited to Vienna to mark this momentous event. 300.000 people came out on the Ring and the journalist notes a lack of enthusiasm in the crowd, which is more preoccupied with mundane issues like the recent increase in the price of potatoes and tram fees.

The departure of the occupying forces is perceived with mixed feelings by the population. The Eastern part of the country which had been under Soviet occupation is rejoicing, while the West is fearing the departure of Western money. (Salzburg had been the home of 17,000 Americans during occupation who were spending more than 30 million USD annually).

Beyond the grim economic, political, and geopolitical situation, he tells us that Vienna still knows how to have fun.

Of much larger impact for the regular Viennese was the return of the Spanish Riding School after 10 years of wandering. The writer tells his faraway audience about the rich history of the school. He then goes on to mention that the school narrowly escaped disaster at the end of WW2 when the battle for the city started and the horses were evacuated to upper Austria just before the arrival of the Red Army. ‘There they caught the eye of General Patton who was an expert horseman and he took them immediately under his enthusiastic protection’.  In October 1955 the director of the riding school ‘who is said to know more about fine horses than any man on the continent’ and his assistants presented to the Viennese the Lipizzans in the first post-war performance – dazzling their audience.

By far the biggest event of 1955 for all the Viennese was not the treaty but the re-opening of the State Opera. ‘Here was indeed a striking demonstration of the Austrian’s ability to ignore the facts of life by escaping into a pleasant haze compounded of singing, waltzes and wine’.  We are told that a fever ‘gripped the city for a good six months before the re-opening of the State Opera House on November 5th, 1955’. In fact, it was not a single opening event but eight openings. Everybody wanted to attend. Who was going to get a ticket and who not was the main discussion topic of the Viennese throughout that year, a frenzy that tore apart many long-established friendships.

This year’s 26th of October will probably be much quieter with many celebrations organized both in Austria and abroad and with people happy about the long weekend ahead. (Ra) 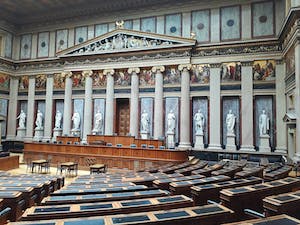