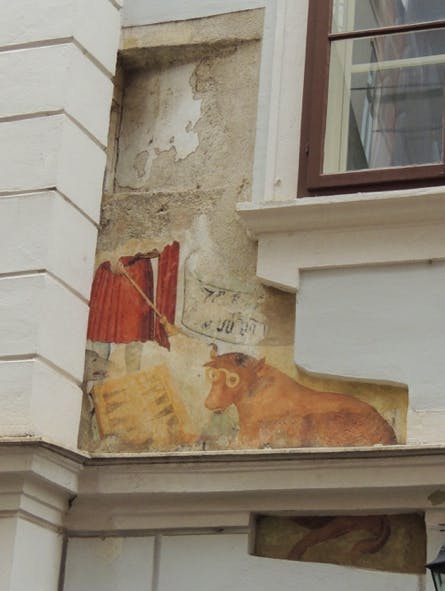 Strange things happen in Bäckerstrasse in the first district of Vienna. Take a close look at house number 12 because what you will discover is definitely curious. Or have you ever seen a cow and a wolf playing a board game before?

Originally the painting on the facade was much larger than what is visible today. Besides the two playing animals there was a furrier (a craftsman who works with animal skins) and a hunter with his dog. Several interpretations and legends developed around the image. According to one of them, the fresco has a rather deep and somber meaning. It interprets the playing animals as personifications of the Catholics (the cow) and the Protestants (the wolf), whereby the 16th century image becomes a symbol of the religious disputes that were highly relevant at the time the fresco was created.

A popular, far from cheerful legend goes like this: Once upon a time, the house belonged to Judge Hieronymus Kuh. In his spare time he liked to play board games with his friend Hans Kagelwidt. Hans fell in love with the judge’s daughter Trudchen, and the two decided to get married. A party was planned, where not only the young couple was to be celebrated, but the house was to get a name. The future bridegroom was given the task to come up with one name and to commission an artist to paint it on the façade. On the day of the festivities, a large crowd gathered in Bäckerstrasse to witness its unveiling. When the time had come, the laughter was big. The new fresco showed a cow playing a board game, a joke at the expense of the judge, whose surname Kuh means cow in German. Just when his future father-in-law was about to lose it, Kagelwidt revealed that the cow was only painted on a piece of canvas under which the real fresco appeared: an inscription with the new name of the building “House Board Game” in honor of Kuh’s favorite pastime. But it was too late, what was meant to be a joke spread like wildfire among the Viennese, who since then have called the house “Wo die Kuh am Brett spielt” (where the cow plays a board game). According to the legend, the name was soon so well established that later owners had the current fresco painted. Whatever the truth may be, don’t miss this puzzling image on your next city walk. (CH)