The streets are alive with the sound of music 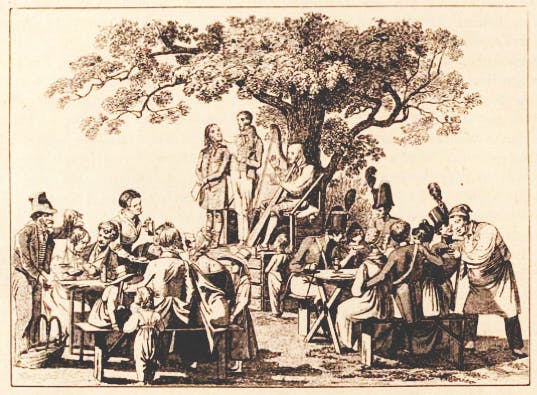 Vienna, the capital of music. When walking through the city, one quickly gets the impression that people like Mozart or Beethoven lived on almost every street corner. The busts of Haydn, Brahms or Maher, to name just a few, greet you in any souvenir shop in their hundreds. Just think of the Staatsoper, the Konzerthaus or the Musikverein, whose golden concert hall flickers over TV sets all over the world on the first of January. None of this is a secret of course, but we recently came across a chapter of Viennese music history that might be rather unknown.

Let’s return to the time around 1800. The Prater, long before the ferris wheel was built, had only recently been opened to the public. When the Viennese enjoyed the fresh air and the greenery on their Sunday walks, it was very likely that they came across one of many harpists, who would have thought? If you were lucky, you ran into a decent musician, because as contemporary reports show, the quality of the performances could be rather poor at times. Some, however, were true favorites of the audience. Take the harp player Karl Perfetta for example. Like many of his colleagues, he belonged to the rather poor classes of society. This did not stop the blind musician from becoming something of a local celebrity. The Viennese press repeatedly reported about him, praising the musician and composer. One time his harp was broken, so a call for donations was organized to buy him a new one. When his apartment was robbed during a hospital stay, a benefit concert was held in the Josefstadt Theatre, where some of his own compositions made it into the program. But Karl was not the only beloved street musician. One of his collogues for instance only performed pieces by Mozart, which brought him the rather obvious nickname Mozart-Harpist. Or take Philipp Hacksfellner, who is said to have performed at the imperial court, the most prestigious venue for any musician.

Although harps have largely disappeared from the cityscape today, street music is still very much a thing in Vienna. If you are lucky, you can encounter an accordion-playing horse in front of Museumsquartier or listen to the compositions of young talents in one of the bigger underground stations.  So, the next time you stroll through the city keep your ears open, for in Vienna music is not only played behind magnificent facades. (CH)

And if you want to learn more about music in the city don’t forget to check our upcoming tour “In the Footsteps of Vienna’s Musicians” on March 10!