The ghost which kept the high and mighty on their toes

Ghost stories take up a big chunk of Halloween traditions, no matter the age, supernatural beings are always fascinating. We are focusing on the “White Lady” today, she is a ghost that wanders through castles and palaces, all since she has died in a miserable way.

Sagas about the White Lady can be found in almost every European country, most of the time she came from a noble background. She appears as an ancestress and depending on the colour of her gloves she predicts an occurrence. When she wears black gloves, she is

forecasting a tragedy, white ones stand for blessings, such as a birth. It’s rare but not unusual for her to appear after an incident has already occurred.

The White Lady has fascinated people ever since the early modern period, different  dynasties have claimed their own White Ladies, trying to affiliate the ghost to one of their  ancestors. No matter the dynasty, the name Kunigunde will be mentioned in a majority of  the cases. Legend has it that Kunigunde of Weimar-Orlamünde killed two children in the 14th century, after leading a life filled with misery she was turned into a White Lady, others suspected Kunigunde, wife of Ottokar the 2nd, to be a White Lady.

Stories talk about the ghost appearing in Vienna every now and then, the last empress Zita  was very fascinated by her and tried to find out more about the White Lady, though without  any luck. Even the emperors Joseph the second and Franz Joseph the first have apparently  run into her in the Amalientrakt. But the Habsburgs weren’t the only ones that have talked about their encounters with the ghost.

According to word-of-mouth, winegrowers waited for her to appear near St. Stephen’s south tower around 4 pm, giving them the go to start their afternoon break.

We will probably never be able to disclose the secrets around the White Lady, but no matter the origin of the story, we will stay fascinated by the legends. And who knows, maybe you will be able to catch a glimpse of her as you visit the Hofburg? 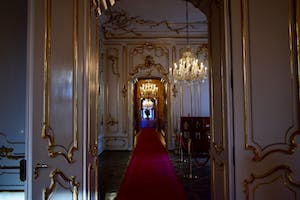 The Amalientrakt can be visited at the Sissi Museum, more information can be found here: