Top 5 Otto Wagner buildings you should know about 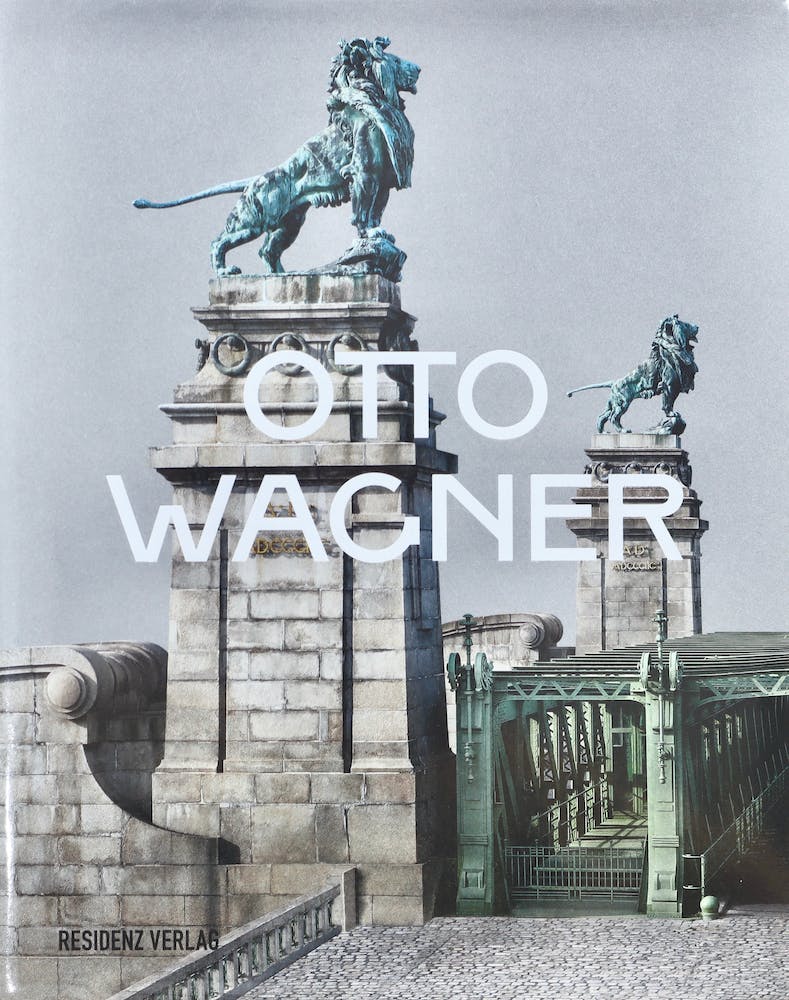 Otto Wagner is one of the most famous architects of the Jugendstil period in Austria.  He was the architect of several important projects in the city such as the well-known Postsparkasse, the Stadtbahn, (metropolitan railway system), and Kirche am Steinhof. But there are other perhaps less-known places where Otto Wagner left his mark. Here our top 5!

The Linke Wienzeile is home to many impressive buildings, but one of the most eye-catching has to be the Majolikahaus with its elegantly cheerful flower facade. It is located next to another impressive but slightly more subdued Otto Wagner building, and together with yet another Otto Wagner building just around the corner, it is known as one of the “Wienzeilenhäuser” (Houses of the Wienzeile). All three of these buildings were built in the closing years of the 19thcentury as part of Wagner’s ultimately unrealized vision to turn the Wienzeile between Karlsplatz and Schönbrunn into a grand boulevard lined with stately buildings.

The Majolikahaus was built in 1898 and derives its name from the floral tiles that adorn its facade. Majolika refers to colorful tin-glazed Italian ceramics from the 15thand 16thcentury, though over time it has come to also refer to colorful ceramics more broadly. The Majolikahaus is also the only realized example of the type of multi-colored facades that Wagner promoted. The tiles are not only beautiful, but also very practical and functional in accordance with  Wagner’s architectural philosophy and ideas about modernity: they are weather-resistant and easy to clean, which has ensured that they have stood the test of time! 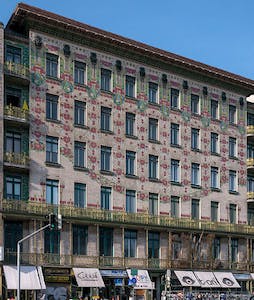 Of the three ‘Wienzeilenhäuser’ that Wagner built at the end of the 19thcentury, the house located at Klöstergasse 3 is probably the least spectacular at first glance. While its 2 slightly older siblings are located directly on the Wienzeile, this building not only has a more discrete façade, but also a more discrete location around the corner from the much-visited Wienzeilen. Perhaps this was not entirely accidental, as this was the only building of the three in which Wagner himself actually lived from time to time.

One of the most remarkable elements of the apartment that Wagner designed for himself at Klöstergasse 3 was the bathtub. Despite being at the height of his career and design aesthetic, Wagner was always conceiving of new and more modern ways to reconceptualize everyday goods – and that included his bathtub. You see, Wagner was not content to bathe in an ordinary tub. No, he designed himself a bathtub made entirely of glass! Even Adolf Loos, famous for his sharp and biting critiques of many of his contemporaries, is said to have proclaimed the bathtub to be ‘a jewel’ upon seeing it. Unfortunately, the bathtub has been lost to time but some photos of it remain – none though, it should be noted, in which the architect himself is having a soak! 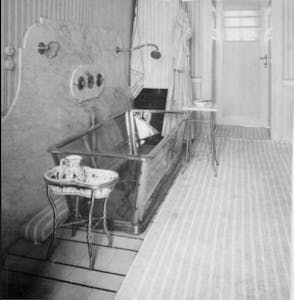 Located at Linke Wienzeile 38, and sometimes referred to as the Musenhaus (House of the Muse), this house was built together with the neighboring Majolikahaus in 1898. The Musenhaus wraps around the corner of the Wienzeile and Klöstegasse with a spectacular, circular façade adorned with delicate gold ornamentation designed by the famous artist Koloman Moser. The building is crowned by the ‘Ruferinnen’ – sculptures of female busts crying out into the world. These sculptures were created by Othmar Schimkowitz, an artist whose work can be found on many of Vienna‘s most famous Jugendstil buildings including the Secession, the Postsparkasse, and the Kirche am Steinhof.

Although we assume the name ‘Musenhaus’ may have to do with the bold female sculptures on top of the building, we have not been able to find any actual explanation for the name. Who are the muses? Why is it called the ‘Musenhaus’? Perhaps one of you knows the answers and can help us to solve this mystery! 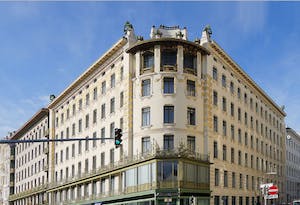 Perhaps you watched the famous new year’s concert on January 1, 2018? In addition to the many images of the national library, maybe you remember the “Wiener Moderne” segment presented during the concert and also the ballet performance. This performance took place at the Hofpavillon (The Imperial Court Pavilion) at the station Hietzing of what used to be known as the “Stadtbahn” (Metropolitan railway). You see, 2018 marks the anniversary of the death of one of Austria’s most influential architects: Otto Wagner. He was one of the representatives of Vienna’s Jugendstil and, together with many important personalities of this movement, he left his mark all over the city, not only in terms of architecture but also city planning. Perhaps one of his most visible marks is the construction of Vienna’s Stadtbahn, which we all have experienced along the route of today’s U4 and U6. It’s easy to recognize the green and white colors of Otto Wagner’s architecture in these two underground lines. We will tell you more about Otto Wagner in the course of this year, but for now we just would like to share with you some pics of the Hofpavillon where the ballet performance took place. Located some meters away from the actual Hietzing metro station, the Hofpavillon was built in 1899 and, as the name suggests, it was built for Kaiser Franz Joseph. The story goes that the emperor waited here for the Stadtbahn on only two occasions. Apparently, he was not a big fan of public transportation. But Wagner did not care, as having the Kaiser use the Stadtbahn even once was already a major achievement! 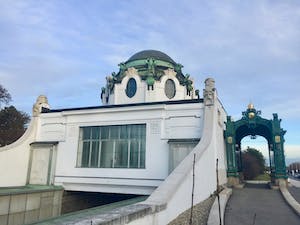 Driving into or out of Vienna in the direction of Hütteldorf, you may come across an impressive aquamarine-accented villa standing in relative isolation at the edges of the Vienna forest. This is the Villa Wagner I, also known as the Fuchs-Villa for the artist Ernst Fuchs. It was built after designs by Otto Wager from 1886-1888 as a family home for the Wagner family, who lived there full-time from 1895 until 1911, when it was sold to the director of the Apollo theater, who lived in it until 1925. Like so many buildings in Vienna, it did not go unnoticed during WWII and was seized by the Nazis for their own use, becoming an office for the Hitler youth. The injustice continued after the war, as the Villa was not returned to its previous owners, but rather became an object of speculation and was even threatened with demolition in the 1960s.

The Villa was saved and revived in the 1970s, after Ernst Fuchs purchased it for a price of 14 million Schillings (around 1 million Euros without accounting for inflation) in 1972. It became his Atelier, and some famous personalities crossed its thresholds during this time, including Falco who sat for a painting. Since 1988 the villa has housed the Ernst-Fuchs-Museum and is open to the public daily from 10am-4pm, except on Mondays. So the next time you drive by, instead of wondering what the place is, drop by and have a look for yourself! 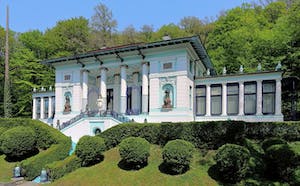