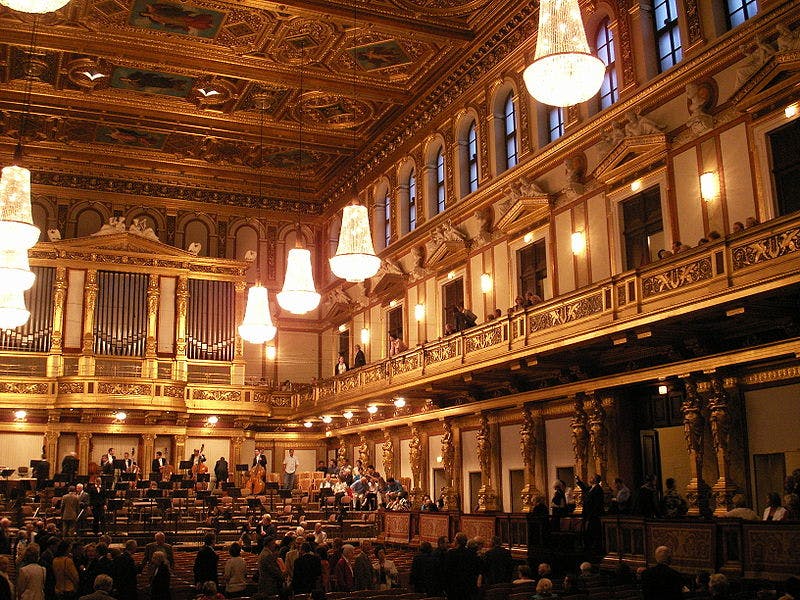 This concert is held in the “Goldener Saal” (Golden Hall) of the Musikverein at 11:15 am. Every year the same programme is performed on December 30, December 31, and January 1, but only the last performance is famous and broadcast. In its current form the tradition dates back to 1939 when it was devised to ‘improve morale at front lines’. The programme contains waltzes, polkas, mazurkas, and marches. Two signature moments are eagerly expected each year by the fans: Johann Strauss II’s waltz The Blue Danube (the unofficial anthem of Austria) and the final encore Johann Strauss I’s Radetzky March.

The Golden Hall is magnificently decorated with flowers. From 1980 until 2013, the flowers were a gift from the city of Sanremo, Liguria, Italy. Since 2014, the flowers have been arranged by the Wiener Stadtgärten.

Among the modernizations made recently by the orchestra there was a sartorial change. In 2016 new costumes were designed by Vivienne Westwood and Andreas Kronthaler and the new clothes were displayed for first time during the January 1, 2017 concert. Another tradition that is recently changing is the presence of women among the members of The Vienna Philharmonic, as the venerable institution did not admit them among its ranks until 1997. But times are changing and the big question, now, is when will a woman conduct the famous concert.

If you intend to be among the possible lucky persons and attend in person next year’s concert, you should plan now. As the demand far exceeds the available places, the Philharmonic accepts applications between February 1 and 28, 2019, to take part in the drawing for tickets to the end of year concerts 2019/20. (Ra)