Vienna Rotunda: The Life and Death of the World’s Largest Dome 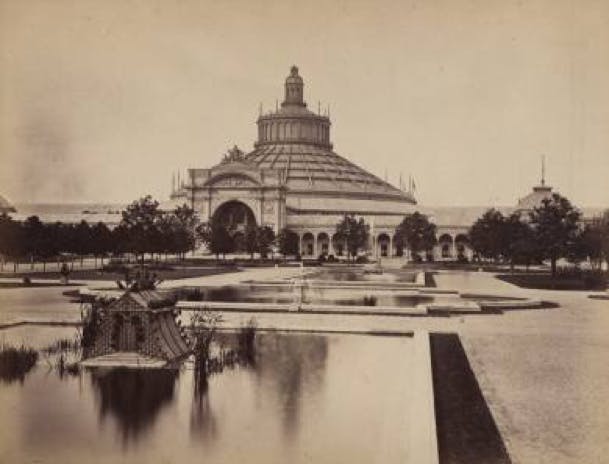 The grounds near Prater Messe where the current WU is located may seem to have been a largely unused space before the WU was built a few years ago, but in fact these grounds and their use have a long history. It was here that in 1873 the world’s 5th World Fair took place, which was also the first World Fair in a German speaking country. An area of 16 hectares were chosen within the Prater, which had previously been the imperial hunting grounds, but had already been bequeathed to the people of Vienna by Kaiser Josef II in 1766. The ground were 5 times as large as the grounds in Paris where the previous World Fair had been held, and was meant to impress.

A central building that became the symbol of the World Fair was the Rotunda, which was by far the largest domed structure in the world when it was built, with a diameter of 108 meters. This was only surpassed by the Fair Hall in Belgrade in 1957, which has a dome diameter of 109 meters. In spite of this, the fair itself was disappointing in terms of the number of visitors and ended up being a financial disaster. It had rained for several days leading up to the opening of the fair on May 1, 1873, which had transformed the Prater into something of a swamp. This was compounded by the stock market crash on May 9th and subsequent financial crisis, which further dampened optimism towards the fair. On top of this, the poorer districts of Vienna also experienced a cholera outbreak at this time, which probably also discouraged people from visiting. In the end, rather than the expected 20 million visitors, only 7.2 million people came, and resulted in a deficit of 15 million guilders. Therefore, although the Rotunda was intended to be torn down after the fair, the lack of finances meant that there were insufficient funds to do this and so it remained standing.

Despite the impressiveness of its construction, the Rotunda almost from the beginning was considered to be a potential fire hazard, and a large fire broke out in 1937. The use of tin for decorative elements in the ceiling of the rotunda prevented water from reaching the burning wooden parts, which caused the dome of the rotunda, which had 400 tons of wood built into it, to quickly burn and collapse. The Rotunda burned for an entire day, after which very little of it was left. This fire was one of the largest ever in Vienna, and is how the city lost one of its historical sites.