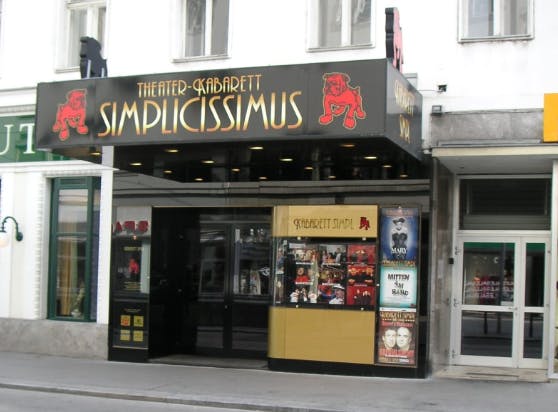 It’s well-known that the Viennese have a particular and biting sense of humor, elevating a sarcastic wit to a coffeehouse art form known as ‘wiener schmäh’. Alongside this, however, Vienna has a long and celebrated history of cabaret, which originated most likely in France before spreading across Europe in the 19th century. It was a kind of entertainment that appealed to the masses, and was a way to bring social commentary and political critique through satire to a broader public.

The oldest cabaret that continues to be in operation in Vienna is the Biercabaret Simplicissmus – known today just as ‘Simpl’ – which opened its doors on October 25, 1912 and has remained in operation since then. Located in the Wollzeile in the 1st district, it took its name from a satirical newspaper in Munich, and continues to have a bulldog designed by Koloman Moser as its logo; ‘Bulli’, as he is known, was taken to be an apt symbol for the cabaret on account of the fact that he “raunzend bellte, aber niemanden ins Wadl biss” (incessantly barks but doesn’t bite anyone in the calf). Whether such famous personalities of the Simpl stage as Karl Farkas, Otto Schenk, or Michael Niavarani are really all bark and no bite is open for debate – but if you find yourself in the 1st district with a few hours to kill, drop by and see for yourself! (C.G.)