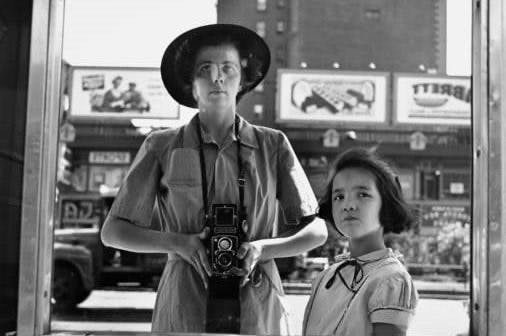 It’s Christmas again in Vienna for photography lovers. After the Polaroid exhibition and in parallel with the Man Ray and Elina Brotherus shows, Westlicht Gallery brings to town the works of Vivian Maier.

The simplest way to start talking about Vivian Maier is to use the saying of another famous photographer, Diane Arbus: ‘A picture is a secret about a secret, the more it tells you the less you know’. The life of Vivian Maier was one of these pictures.

In 2007 a  real-estate agent – John Maloof – buys at an auction a box of photographic material. Looking for the author, he finds no public record until 2009 when a Google search returns the obituary of a recently deceased nanny in Chicago. Struggling to put together the hundred thousand frames shot in New York, Chicago, France, South America, and Asia between the nineteen-fifties and the nineteen-seventies with the biography of the photographer, little more comes to light. She was born in New York in 1926 to a mother of French descent and a father born probably in Sopron in what was then Austro-Hungary. She was a nanny all her life and she did not publish a single photograph.

‘Finding Vivian Maier’ is a documentary co-directed by Maloof where he interviews people that used to know her (mainly the kids she took care of, now middle-aged). They remember her as a person both curios and private. Even if they were seeing her with her twin-lens Rolleiflex camera all over town, no one was aware that she was capturing the pulse of the city in hundreds of thousands of shots.

While the puzzle of her personality is definitely irresistible, her creation is probably where our focus should be. And a selection of her best photography is available for all to see and reflect upon in Vienna this summer.