What’s in a Viennese Street Name? 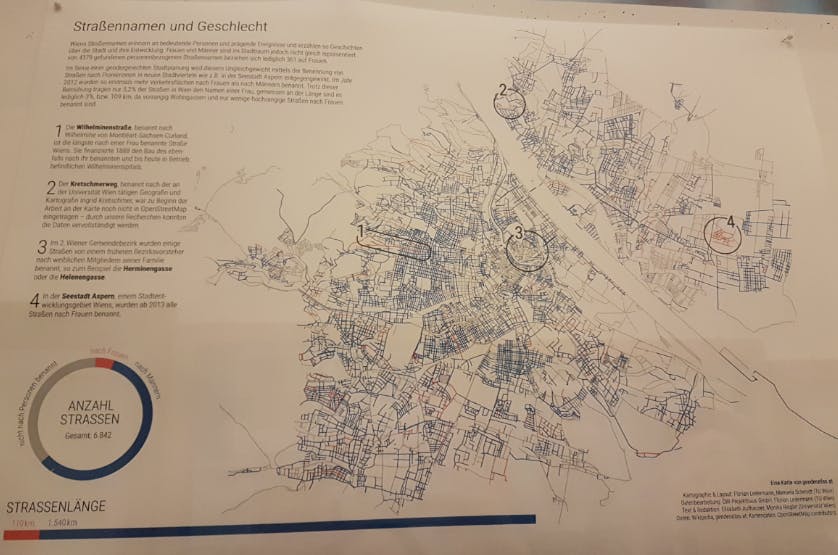 There are many fascinating maps in existence, and not all of them are old. The Research Center for Cartography at the Technical University specializes in all kinds of maps, and put out a ‘Karte der Woche’ (map of the week) for public viewing. This week’s map visualizes the streets of Vienna in an unusual but insightful way: by gender. No, not by the gender of the street itself, which the German language generally designates as female (die Straße, die Gasse), but rather by the gender of the person after which the street is named. Suddenly, when classified this way, the streets become significantly less female. The map identifies over 6,800 streets in Vienna as named after a male, a female, or neither and finds that out of 4,379 streets named after people, only 361 are women. Surely there have been many more important women in Vienna’s history than this, but they have long been overlooked and under-celebrated. The planners of Seestadt, one of the newest parts of Vienna, have strived to take a small step toward correcting this balance and all street names in this neighborhood have been named after women since 2013. The longest street in Vienna named after a woman is Wilhelminenstrasse, which received this name in 1872 in honor of Wilhelmine von Montléart-Sachsen-Curland, and during her lifetime no less. Wilhelmine is in fact only one of several women in her family to have a Viennese street named after her, and she didn’t stop at just a street: the Wilhelminenberg, Wilhelminenspital, and Schloss Wilhelminenberg all bear her name! (C.G.)

Check out the Map of the Week in the entrance corridor of Erzherzog Johann Platz 1, 1040 Wien.

Map created by the Research Group Cartography at TU Wien and genderatlas.at