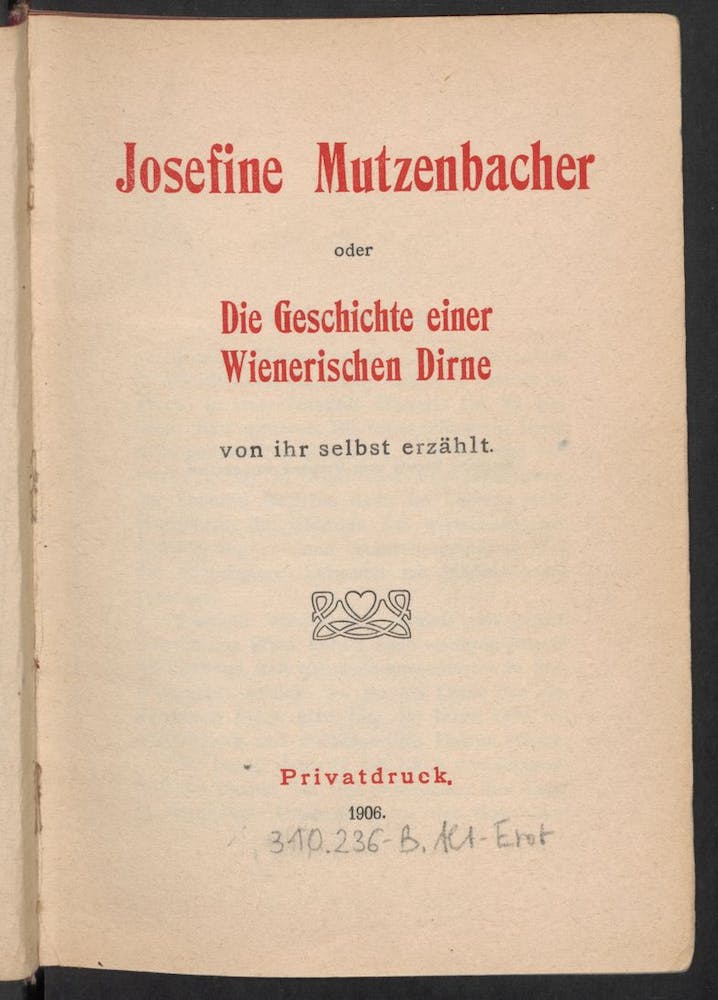 Josephine Mutzenbacher or The Story of a Viennese Whore, as Told by Herself  is written as the memoir of a middle aged, successful Viennese courtesan who remembers her childhood before age 14 when she becomes a licensed prostitute in Vienna to support her unemployed father. And this is where the moral dynamite comes from: all her ‘sexual education’ depicted with vivid details in the book takes place between ages 5 and 13. Published anonymously for obvious reasons, there has always been a high interest to ‘unmask’ its author. The style employed and the details of the work could not have been put together by an amateur and nowadays the consensus is that it was written by Felix Salten (who also authored the well-known story Bambi).

Apart from the obvious pornographic content, the book is considered to have also literary merit: it sheds light on the hypocrisy of the ‘high classes’ during Fin-de-Siecle Vienna; it is written in Viennese dialect – giving it documentary value for those times and shedding some light on the everyday life at the margins of society where the action of the book is placed.

But even so, due to its content a long legal debate has rattled the courts whether to forbid the youth (younger than 18 years old) access to the book. On 27th of November 1990 the Federal Constitutional Court of Germany took what came to be known as the Mutzenbacher Decision: the work is definitely pornography but it is also an artistic output and there should be no restriction to access to art. The decision went beyond the book that generated it as it set a precedent regarding which has a larger weight in German Law: Freedom of Expression or The Protection of Youth.

The work fired the imagination of many subsequent generations of artists and has been used as inspiration for films, theater pieces etc. (Ra).