Wiener Riesenrad – The story of a Viennese symbol 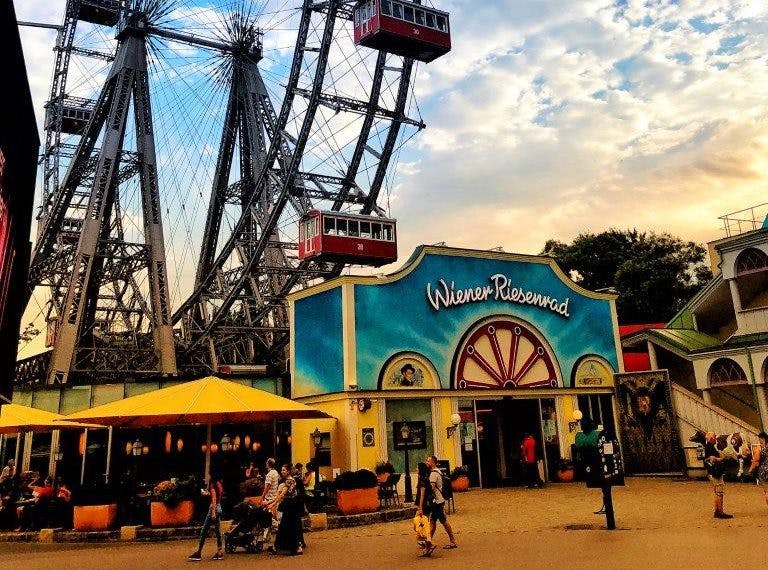 One story tells that sometime during World War II a German official took his wife and a couple of friends on a trip to Vienna. Pleasantly surprised by the relative calm of the Viennese life in comparison to wartime Berlin, their home town, they decided to do one of those things most tourists can’t resist while in town: use the Wiener Riesenrad – Vienna’s giant Ferris Wheel to see the city from up-high. While taking in the beautiful view, their luck must have run out. The anti-aircraft alarm went on and the person manning the wheel went to a safe place, forgetting about his poor customers who went on a two hours merry-go-round. Theirs was a truly unforgettable trip.

The Riesenrad is the setting of thousands of unforgettable experiences, most of them probably happier. It was built in 1897 to mark the 50th anniversary of Emperor Franz Joseph’s accession to the throne. With a diameter of the wheel of almost 61 meters, it was the world’s tallest extant Ferris wheel from 1920 until 1985.

Its history is a series of ups and downs like the century it witnessed from above and below. A permit for its demolition was issued in 1916 but because of a lack of funds with which to carry out the destruction, it survived. Its wartime owner, Eduard Steiner, was murdered at Auschwitz. In 1944 it burned down and in 1945it was rebuilt, together with St. Stephen’s Cathedral, the State Opera House, and the Burgtheater, as a proof for the symbolic value it carried for the city.

After the war the wheel was used as setting for several famous movies, starting with The Third Man and continuing with the 1987 James Bond film ‘The Living Daylights’ which features a lengthy romantic scene on the wheel. Also scenes of ‘Before Sunrise’ (1995) were filmed around the Prater and on the wheel.

The wheel was recently completely refurbished and continues to offer beautiful views over Vienna for tourists and locals. For those who want to want to get a deeper view into its history, a visit to Prater Museum is always a good idea. Also, make sure to join our Secrets of Prater tour, which will be announced in the next days! (Ra)