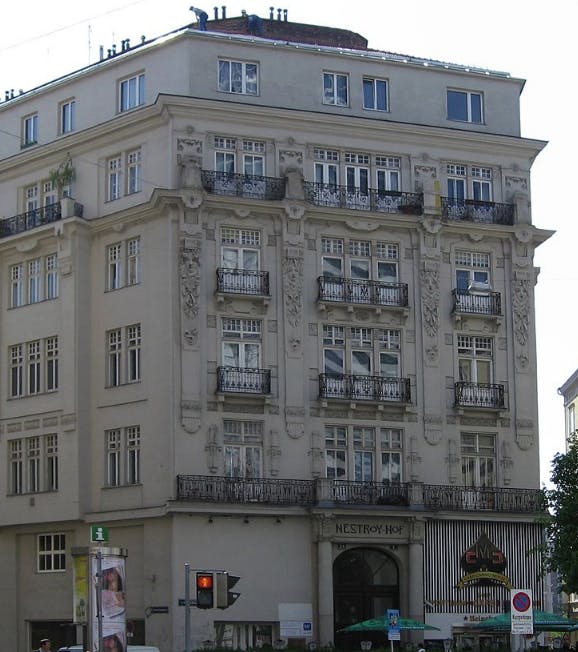 Nestroy is a name that comes up frequently in Vienna, especially if you are traveling along the U1 where you will eventually come across Nestroyplatz. But who was the eponymous Nestroy? His name was in fact Johann Nepomuk Eduard Ambrosius Nestroy — quite a mouthful! — and he was a famous singer and playwright during and immediately after the Biedermeier era of Viennese historz. Along withe subway station and square named after hin, there is also the Nestroy-Hof.

Located on Nestroyplatz, the Nestroy-Hof was designed and built by Austrian architect Oskar Marmorek, but not for himself. Rather, after marrying the painter Nelly Schwarz, he reportedly built the magnificent hof for his father-in-law Julius Schwarz…which surely is one way to get into the good graces of the in-laws! It was built in 1898 in the Jugendstil style so popular at the time. It housed not only a theater, but a restaurant, a beer hall, and a dance club. After going through some other uses through the years, in 2003 a ceiling was removed to reveal a previously concealed auditorium that could seat more than 250 people. Today, the Nestroyhof continues to function as a theater so if you are in the area, pop on by to see whats on the program!