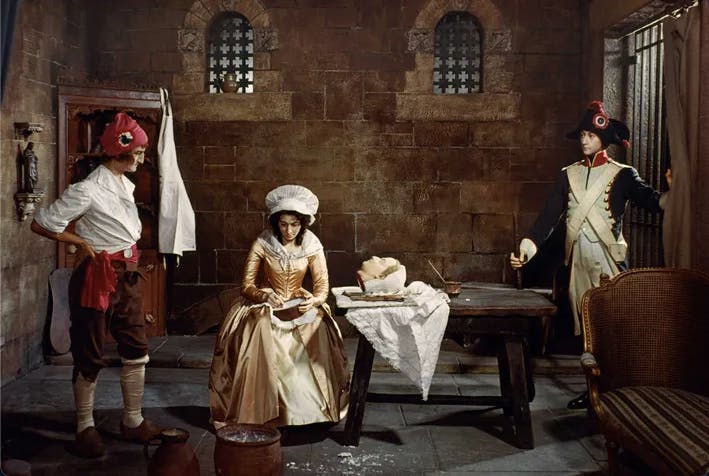 Some days ago, we told you about the childhood and early career of Marie Grosholtz, who is now known as Madame Tussaud. While her beginning can be attributed to her mentor, doctor Philippe Curtius, becoming an icon was definitely her own doing.
Already early on Marie loved creating wax models of celebrities. Back in 1780 these were Jean-Jacques Rousseau and Benjamin Franklin, among others. In her memoirs she claimed that her work during that period was so well received by the royal court that she was invited to live in Versailles for a period of 9 years (though no evidence was ever found to support or confirm that this indeed happened). One thing was sure, she was a sympathiser of the royal family and during the turbulent times of the French revolution it got her arrested. Her head was shaved and she was about to be executed, only to be pardoned by the executions administrator Collot d’Herbois who was a fan of Dr. Curtius’ work.
During the reign of terror in France, Marie had to make face masks of those who were decapitated, including the faces of the royal family.
In 1794 Marie inherited the collection of the now deceased Dr. Curtius and a year later she married a civil engineer named François Tussaud.
Her real success was in England where she toured and exhibited her art in temporary exhibitions for over 33 years. Shortly after she left France the Napoleonic wars broke out and she couldn’t return or see her husband again. What she could, however, was to display her art which was very well received. Eventually, as touring became exhausting and challenging, she established a permanent exhibition in Baker street.
Following her death at the age of 88 her son François, his son Joseph and his son Jon continued her legacy. Throughout the years, her exhibition became a museum and then a museum empire with branches all over the world.
*In the photo- Marie prepares a death mask from a severed head during the Reign of Terror in France. Photo credit- Granger/Aurimages
Tweet
Email this page to a friend. Email
Click here to visit previous post ← Previous Post Click here to visit next post Next Post →
Skip to toolbar