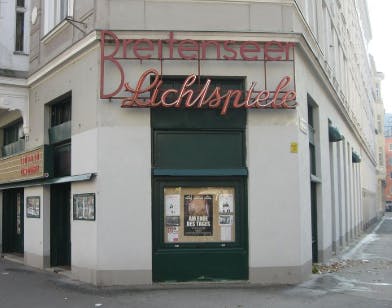 For cinephiles and lovers of tradition, Vienna has lots to offer — but one of its most underrated cinematic jewels has to be the Breitenseer Lichtspiele. Billed as the world’s oldest continuously operated movie theater, this place has remained delightfully stuck in the past with a regular program of silent films that take the audience back to the early years of film making. The theater was founded in 1905 under the name Zeltkino, but has been located at its current location in the 14th district since 1909. It consists of one simple theater room with wooden chairs seemingly untouched by time. And although they are called silent films, their presentation was never truly silent; instead, a pianist or group of musicians would play music to accompany the film. While some wrote and played from sheet music, many of these movie musicians would improvise their tunes in real-time as the film played for the audience – a tradition kept wonderfully alive by the Breitenseer Lichtspiele until the present day.

But it wasn’t only music that accompanied silent films; they also sometimes had narrators who provided live commentary. In the early years, audio technology was not yet mature enough to include sound, so live narrators filled this gap. Even after audio technology improved and films began to use sound, the quality was often so poor that audiences continued to prefer live narration. And just like musical accompaniment, this tradition also continues to live on at the Breitenseer Lichtspiele. Once every few months, a silent film is shown to which a pianist improvises live music while a narrator provides sharp, witty, and often rhyming commentary (in German). This is theater the truly old-school way and shouldn’t be missed!

Although the cinema schedule for the next months hasn’t been published yet, your SV Explorer has it on good authority that the next silent film with piano and narrative accompaniment will be on January 25th, so pencil it in to your calendars! And if you can’t wait that long, then there will be a film with just musical accompaniment on December 28, 29 and 30! (C.G.)