Vienna’s one and only witch-burning, the cruel case of Elisabeth Plainacher

We are staying true to our October topic and since witches are an unmistakably important part of the Halloween celebrations, we will now delve deeper into the story of Vienna’s only witch-burning.

Elisabeth Plainacher, also called Elsa, died in the year 1583 on the stake, burned alive at the age of seventy. Even though Elisabeth wasn’t the only witch that got hunted and killed in Vienna, she was the only one that found her cruel end in the flames.

Elisabeth got married two times, her daughter Margreth got pregnant with Anna, who lived with her grandmother after the death of her mother. Due to epileptic seizures, the people around Anna believed that she was possessed by the devil and according to her exorcist she had more than 12,6522 devils inside of her. Anna’s father, Georg, a supposedly heavy drinker, was one of the responsible people as to why Elisabeth got accused of being a witch. All of Anna’s siblings have died within the same year, reason enough for Georg to go against his mother-in-law. Elisabeth had a broad knowledge of herbs, a small though important detail you’ll read about in most witch-burning case records. According to Georg and a few other voices in their community, Elisabeth was also the one that had bewitched Anna.

Nowadays, we can say that Elisabeth was a scapegoat, used to deliver a message of what would happen if you’d convert to Protestantism, just like she did. Even though the town magistrate saw in Elisabeth nothing more than an old, mentally ill woman, she got charged as guilty, much to the delight of Vienna’s clergy. Many sources talk about her end on the stake, some say that she got bound to a horse’s tail as she was dragged to Erdberg, part of Vienna’s third district, before she was burned alive.4 The stake was placed on the ground of the “Gänseweide” an area between the bridges Franzensbrücke and the Rotundenbrücke.

Many others have been burned alive on the same spot as Elisabeth, though none of them were charged for the same reasons as her. If you want to visit the area Elisabeth has lived in, you can either walk to the Ledererhof in the first district or join our guide Wolfgang on his ‘Blutchronik’ tour. In Vienna’s 22nd district you will also find a street named after Elisabeth, a small reminder of the woman that has died because of her religious beliefs and a son-in-law
guided by his hatred. 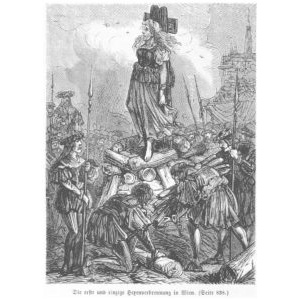