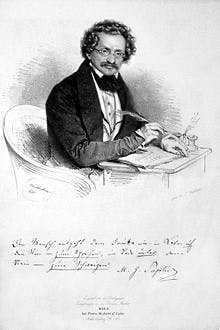 Nowadays, comedy and satire writers are quite popular and are especially liked by those who aren’t the target of their content 😀 But in the 1st half of the 19th century, being a satirical writer was quite a dangerous job. One wrong joke and you can get summoned to a duel or even face imprisonment. That’s exactly what happened to the Austrian satirical writer and journalist Moritz Gottlieb Saphir.

Born as Moses Saphir in a village in Hungary, Moritz was destined to be a Rabbi. He studied first in a yeshiva in Bratislava and then in Prague. His travels exposed him to new, mainstream knowledge and he began to study English and German, and later also Latin and Greek. He moved to Pest, Hungary where he wrote his well received book “Poetische Erstlinge”. The book got him an invitation to Vienna where he was employed by the Wiener Theaterzeitung as a writer.

This is when things got complicated. Moritz made a bad name for himself due to his merciless reviews and his unpopularity eventually got him sacked. He had an exceptional ability to offend people through his wit and that got him in trouble also in Berlin. He was summoned to a duel by the playwright Kurt Schall and was even imprisoned shortly after writing a satirical poem about the German operatic soprano singer Henriette Sontag.

He made too many enemies in Berlin, and so in 1829 he decided to move to Munich where he converted to Protestantism, The conversion somewhat eased the restrictions which were imposed on him due to his reputation. Finally, in 1834 Moritz returned to Vienna. His goal was to start his own newspaper, but he was forbidden to do so. Only 3 years later, in 1837, the ban was removed and he was able to found a daily satirical publication called “Der Humorist”.

When the people’s revolution broke out in 1848, Moritz became the first head of the Revolutionary Writers Association. As the unrest continued to grow, he moved to Baden where he died. He was truly a fascinating man and we are happy to celebrate his 226th birthday today!