The Queen in Vienna 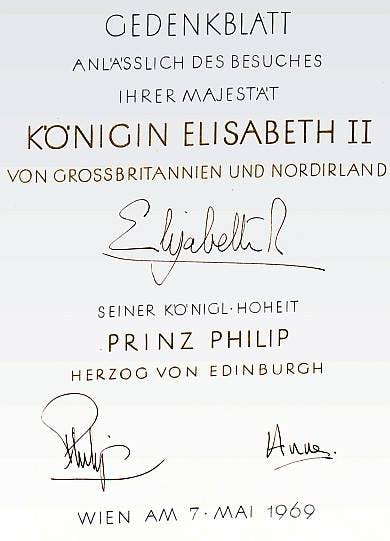 By now  is it probable that you already heard the news: Archie Harrison Mountbatten-Windsor was born on May 6.  And this happy occasion has coincided with a royal event that took place in Vienna some time ago, namely the visit of the Queen.  It was the year 1969 and from May 5-7, Elisabeth II, Prince Philip, and Princess Anne paid a state visit to the city. The Queen received a warm welcome with 50,000 Viennese waiting for her. The royal family visited the Parliament, the State Opera, the Stephansdom, a Gemeindebau (social housing), the Schatzkammer (The Imperial Treasury), the Spanish Riding School, and more. In all this time, the royals really fascinated the people in particular because the marvel of the television allowed the “common” people to be with them “live”. And of course, the royal family stayed in the Imperial Hotel that back in the day served as the city palace and residence of Duke Philipp of Württemberg and his wife Archduchess Maria Theresa of Austria. And if you think someone could now go to the Imperial Hotel and sleep in the same bed as the Queen, then think twice.  The Habsburgs (or specifically the Hofmobiliendepot – “Imperial Furniture Museum”) provided the furniture for the royals, including a bed from the times of Maria Theresia, which was decorated with a Habsburg crown on the top of it! (Cr).