There is no shortage of churches in Vienna, some better and some lesser known. One of the probably lesser-known churches that deserves a second look is the Evangelische Kreuzkirche Hietzing. Although it was not completed until 1931, it borrows heavily from earlier traditions and restrictions that were placed on the building of Protestant churches. Although Protestantism was tolerated in the late 18th century, churches were to be built in the style of regular houses and they were not allowed to be located on main thoroughfares but rather only on side roads. The Evangelische Kreuzkirche Hietzing harkens back to these ordinances with its rather understated and flat facade that combines the traditional with the modern. 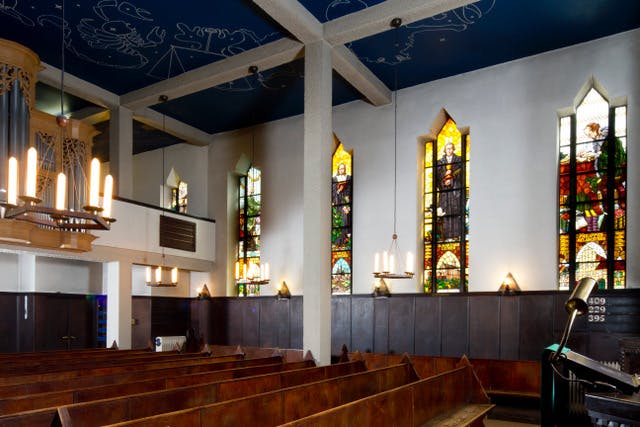 A major motif of the church facade is the use triangles and triangular shapes. This can be seen as a subtle nod to the neo-gothic style that strongly influenced church architecture in Vienna, though it more likely recalls the brick gothic styles of northern Germany. The church was built in 1931, with only a small clock tower and simple cross indicating its function as a church. It is on the inside that the church really comes into its own with stylish ceiling and wall paintings, an unostentatious golden alter, and beautiful stained-glass windows. 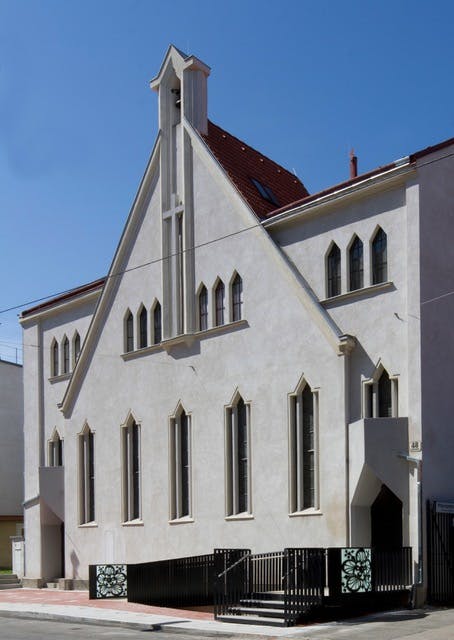 If you want to know more about the history of the Evangelische Kreuzkirche Hietzing, it will be part of the “Tag des Denkmals 2019” on September 29th.  The Tag des Denkmals is organized by the Austrian Federal Monuments Authority (Bundesdenkmalamt – BDA). The aim of the event is to make the public aware of the importance of cultural heritage and to raise awareness about heritage protection and monument preservation. (CG)

The Lutheran Church in Vienna has a long history. This Sunday you can learn more about it during the Tag des Denkmals 2019. The Evangelische Kreuzkirche Hietzing will be part of the event and it is definitely worth a visit. A preview here! Thanks to Vblogks for the video!https://secretvienna.org/evangelische-kreuzkirche-hietzing/Tag des DenkmalsBundesdenkmalamt ÖsterreichEvangelische Kirche in Österreich