The Swedish Nightingale in Vienna 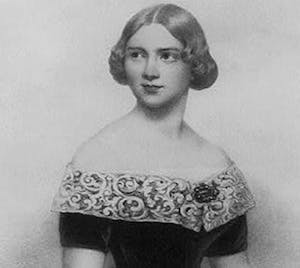 She was called the ‘Swedish nightingale’, and she was famed for her extraordinary voice. Jenny Lind was a Swedish opera singer who would find massive success touring both Europe and America, drawing crowds of screamings fans that would have put even the Beatles to shame – and this in the mid-1800s when recording technology was still decades away. She was born in Stockholm where she studied opera before moving to Paris to train with Manuel Garcia. In 1846 she debuted in Vienna and became known as the Swedish Nightingale as a result of the special timber of her voice, as well as her ability to sing beautiful trills and stacatto. By the end of the 1840s she had become the darling of the European opera scene, but it was in the United States that hordes of people turned out to welcome her when she arrived – reportedly 30,000 people came out to see her arrive in New York in 1850, despite the fact that the vast majority had never heard her sing! Although she was said to have had a genuinely lovely singing voice, the hype around her arrival in the US was manufactured by no less than P.T. Barnum himself. Barnum had made a name for himself as a showman and entertainer with circuses and sideshows, and recognized that he could market Lind in the US and make a pretty penny. Indeed, this is what he did, but Lind was no pushover; she quickly realized how much money Barnum stood to make from her, and renegotiated her contract to make sure that she also got a good cut of the profits, which she then used to finance schools in her native Sweden. Although she only spent a short time in Vienna, she is memorialized in the 10th district with Jenny-Lind-Gasse, named after her in 1951.