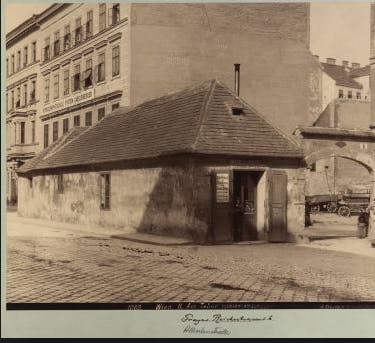 Have you ever wandered through the 2nd district and found yourself wondering what “Am Tabor” means? If you are well-versed in battle and defense terminology from the Middle Ages the meaning may already be clear to you, but the rest of you are likely left wondering ‘on the…what?’.

As it turns out, a ‘Tabor’ refers to a defensive structure from the Middle Ages that was often built around churches as a protective measure during times of conflict. The word ‘Tabor’ comes from the Hussites, who originated in Bohemia and were a Christian movement following the teachings of Czech reformer Jan Hus. A radical and violent wing of this group called themselves Taborites after the Biblical Mount Tabor near Galilee, which they saw as a place of freedom where they would ultimately gather to share the Eucharest.

‘Am Tabor’ in Leopoldstadt actually refers to a bridgehead that was built to secure a previously existing bridge spanning the unregulated Danube against Hussite attacks at the beginning of the 15th century. This bridgehead came to be strategially important in defending the city, helping to fend off attacks from Bohemia and Moravia in 1425 and the 1440s. Over time, the designation ‘Tabor’ came to be used for various areas in and around this original bridgehead, before expanding to cover the entire area in 1890 – which is how we still know it today! (C.G)

Image credit: Wien Geschichte Wiki. Corner of Am Tabor and Alliiertenstrasse in 1902.