A trot and a run: the Trabrennbahn 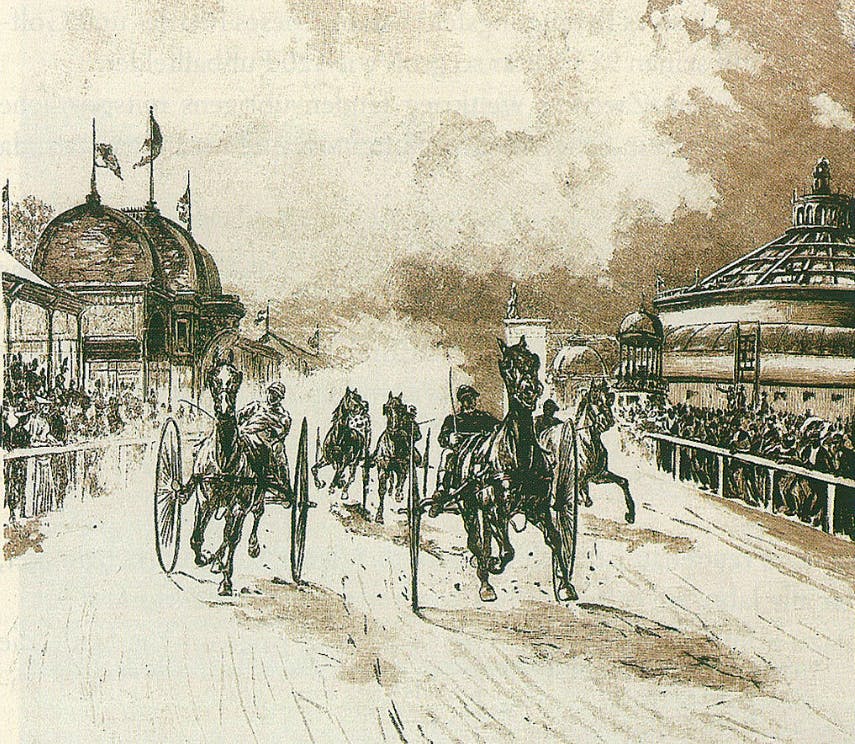 We recently told you the history of the Galopprennbahn in Vienna, but as we mentioned in that story, there has historically been another horse track in the city: the Trabrennbahn, a race track specifically for trotting rather than galloping. It is the younger of the two racetracks, and was opened in 1878. It is located in Krieau, behind the new campus of the WU and adjacent to the Prater park. The race track itself has a few notable features, including majolica reliefs on the grandstands and a five-story judging tower crowned by a 3-story lantern-shaped fixture.

The race track was built just next to the historical Rotunda in the Prater, which was erected in 1873 for the world fair, and was the world‘s largest rotunda at the time. The Rotunda had a peripheral pavilion attached to, which was also erected for the World Fair, but was torn down immediately thereafter in 1875 – unlike the Rotunda itself, which remained there until it was destroyed by a large fire that broke out in 1937. The Trabrennbahn was built in the space that was freed up next to the Rotunda when the side pavilion was dismantled. The races that took place there were harness races, in which horses were kept to a trot while pulling a 2-wheeled cart in which the driver, or jockey, sat. Today, the area around the Trabrennbahn has been built up with apartments, offices, and the new WU campus. The race track itself is protected as a historical site though, so you still have a chance to visit it!

The photo is a drawing of the Trabrennbahn from 1888, in which the now-gone Rotunda is clearly visible.