Fire at the Hofburg 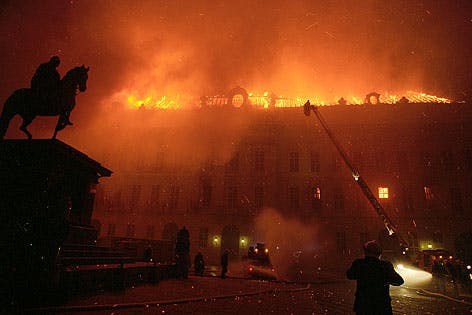 November 27, 1992: A security guard raises the alarm after discovering flames in the Redouten ballrooms at the Hofburg. What followed was the largest and most dramatic firefighting operation in Vienna´s recent history.

This was not the first time the ballrooms were damaged by fire: Not too long after being built in the early 17th century the tract caught fire for the first time in 1699. After being successfully reconstructed, the premises were well known for the masked balls, the Redouten. Later in its history, the ballrooms also served as a famous venue for banquets and concerts, such as from composer Paganini, who had his first concert there. After 1930, opera performances and exhibitions of the Austrian National Library took place inside the famous halls.

When the fire raged in the night of November 1992, it was not foreseeable that one of the largest operations of Vienna’s fire department after World War II would take place. One could not imagine the extend of the destruction. Since the building material was so easy flammable the fire was able to spread almost unstoppable. Falling chandeliers and ceiling parts made the work of the firefighters more difficult. Also, the strong west wind that drove embers put the National Library, the Treasury and the Spanish Riding school in acute danger. Thanks to passer-by, all horses of the school were brought to the Volksgarten and over 200 policemen and women formed a human chain to save more than 10,000 valuable books from the National Library.

The fire destroyed completely the Great Redoutensaal and its roof and the Small ballroom was partially damaged. After long discussions, the monumental restoration began and currently the Redouten ballrooms are used as a press centre for the government and also for theatre and opera performances as well as ball events. (JE)