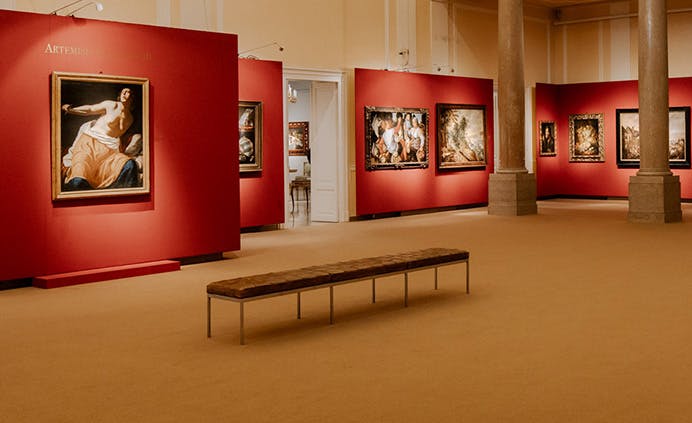 400 years ago, the Baroque painter Artemisia Gentileschi put everything at risk as she wrote history for being among the first women to express experiences with sexual violence through art. The story might be more significant than ever since in today’s times more and more women reach out and share their traumatic experiences of assault and powerlessness with the public. Her work Lucretia serves as an example of her characterization of women with strong and determined personalities and is now hitting the art market at the Dorotheum. So let’s take the opportunity to look back at a leading figure, who was fighting for herself and other women.

For a female artist the portrayal of nude woman was unusual – especially if presented in a strong and superior way. Born in Rome, Artemisia was the only daughter of the painter Orazio Gentileschi, who strongly supported her and in whose atelier she was trained as an artist. The painting Susanna and the elders show the early artistic abilities of the then 17-year-old: like most Baroque works, it shows a biblical narrative but more importantly also addresses the sexism of Roman society. Two old men stare at a young girl who turns away in disgust – the parallels to Artemisia, who had to sit model for her fathers’ pupils, are undeniable. Later the artist was raped by her then-teacher, which led to a trial in which not the rapist, but Artemisia was tortured. During this time her most famous work emerges, which can be seen in the KHM: Judith beheads Holofernes, which is not only a proof of trauma and a desire for revenge but also a virtuoso realization of color, light and emotional expression. Artemisia moved to Florence after the trial where she started a career of great success and where she enjoyed the favor of the Medici family and was the first female artist to be admitted to the Accademia del Disgeno.

Artemisia Gentileschi’s extraordinary life as an accomplished female painter in the 17th century is well documented and she remains an intriguing subject of films and books to this day. (JE)

Update: The painting was sold for EUR 1.9 million!