Japanese Pagodas on the Danube 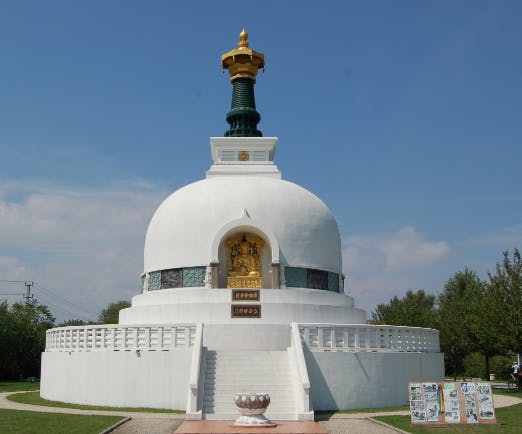 Now that the days are getting longer and warmer, its the perfect weather to go for a run or cycle along the Danube. One of the nicest places for this is the Donauinsel, which stretches some 21 kilometers in length between the Donau and the Neue Donau. If you go for a run here, especially in the evening, you may notice a white temple-like structure glittering through the trees on the other side of the Danube. It is in fact a Buddhist stupa – something one might expect to see in Asia, but is quite unusual along the shores of the Danube. Stupas are generally mound-like structures meant for meditation.

The official name of this stupa is the Peace Pagoda Vienna, and it is one of 80 such peace pagodas around the world. It was built in 1983, and is associated with a small offshoot of Nichiren Buddhism of Japan. One of their missions is to spread peace around the world, which has included building such pagodas as the one that can be found along the Danube. It is open to the public and regularly used by the Buddhist Society of Vienna for various ceremonies.