The Catacombs of St. Stephen’s cathedral 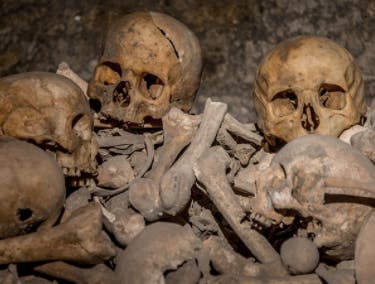 Most of you have probably walked past or even stepped into the St. Stephen’s cathedral by now. Most of you surely know that you can visit the landmark’s platform via an elevator or by taking the 343 steps up the south tower. But did you know that beneath the cathedral, you can find ossuaries filled with bones and skulls?

The laying of the first stone happened in the year 1137, within three construction phases the cathedral was built into its impressive appearance. From 1255 till 1732 a cemetery surrounded the cathedral and from the year 1718 on a crypt was built beneath the upper vestry. Due to the closing of the cemetery more crypts were built so that they could be used as ossuaries.
Within the years 1745 till 1783 10.893 people were buried in the crypts beneath the cathedral. If a room was filled to the brim with bodies, it simply got walled up. As you can probably imagine the cathedral had to be closed every now and then, whenever the cadaverous odour got too much to handle. One can only surmise how people must have felt as they walked through the chaos of rotting bodies, skulls, and bones.

Since the 19th century, a mammoth bone is part of a collection belonging to the University of Vienna. It was found near the entrance of the cathedral. Painted on it are a scroll, the year 1443, and the letters “A.E.I.O.U.”, standing for “It is Austria’s destiny to rule the world” or “Austria will exist eternally”, just to name a few possible meanings of the series of vowels. The crypts were shut down from August 1784 on and only a handful of people were still allowed to visit those ghoulish vaults. Due to moisture penetrating the crypts most bodies and coffins were relocated to smaller and now walled up rooms. Today you can visit the crypts as part of an official tour, starting from 2,50€ for children and 6€ for adults.

More information about the official tours can be found here
https://www.stephanskirche.at/toursWhileCorona.php

The Secrets of Stephansdom

An exciting guided tour in Vienna’s most important church- St. Stephen’s cathedral. Join us and hear some amazing stories and secrets about the history of this important site as well as about the signs and…