Maria Antonia and the Diamond Necklace 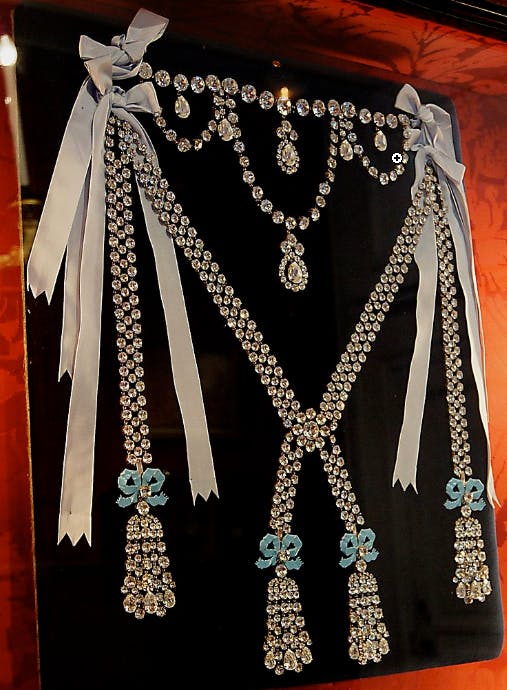 Marie Antoinette is usually considered quintessentially French, indelibly tied to the French Revolution, and famous for her “let them eat cake!” proclamation, which she most likely never said. She was of course the last Queen of France before the revolution, so it’s no surprise that most people consider her to be French. But she was in fact born in the Vienna Hofburg as Maria Antonia, the youngest daughter of Maria Theresia. In fact, this Austrian heritage was one of the reasons she was so disliked in France during her reign, as she was thought to harbor strong sympathies for her birth country, to the detriment of the new country she had acquired through marriage. She spent her formative years in Vienna, between the Hofburg and Schönbrunn, where she met Mozart when they were both 7 years of age. Although nowhere near his skill, Marie Antoinette also developed into a good musician, and was said to have a truly beautiful voice.

One of the things she became most notorious for was the Affair of the Diamond Necklace, which not only helped bring about her downfall, but in a cruel twist of injustice, actually had very little to do with her. The real culprit was probably her grandfather-in-law, Louis XV, who commissioned an extravagant diamond necklace at a cost of almost $14 million for his mistress Madame du Barry. It took years and a small fortune to acquire the necessary diamonds and jewels, and by the time royal jewelers were able to complete the task, Louis XV had died of smallpox. Having invested vast sums of time and money into the necklace, the jewelers then hoped that the new queen Marie Antoinette would buy it, but she turned it down stating that they had more need of ships than necklaces.

Later a scam was cooked up in which a charlatan claimed to act as an intermediary for the queen, who supposedly now wanted to buy the necklace, but didn’t want to purchase such an expensive item publicly during a time of need. The charlatan, a woman named Jeanne de la Motte, received the necklace and promptly picked it apart and sold the jewels on the black market. When payment wasn’t forthcoming, the royal jewelers complained to the queen – who exclaimed that she had neither ordered nor received the necklace. Nonetheless, this incident captured the public attention, and many believed that Marie Antionette had indeed been involved, leading to a decline in her popularity and a perception of her as a manipulative elite more interested in her own vanity than public welfare. Thus, although she was blameless in this incident, the first stones on the path to her execution had been laid.